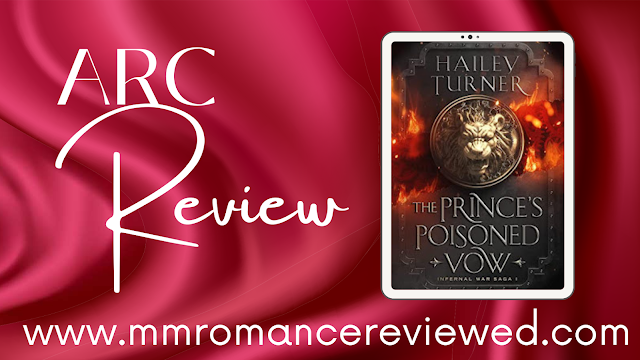 First in a new series the Infernal Saga, The Prince's Poisoned Vow starts an epic story intrigue, magic and steampunk elements. A huge new world build by Hailey Turner with a group of characters showcasing loyalty, love, betrayal, sacrifice and survival.
From the blurb:
Every country is built on revolution. 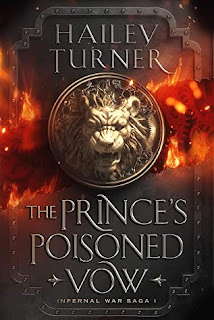 THE WARDEN. Soren is a nameless, stateless man, tasked with keeping watch over Maricol’s borders. He isn’t meant for politics, only dealing with the dead. His past was buried in the poison fields, but after a fateful encounter with a prince, Soren comes to realize he can’t keep what magic burns inside him hidden forever.
THE PRINCE. Vanya Sa’Liandel was the spare who survived the Houses’ murderous games to become the Imperial crown prince of Solaria. He has a duty to his country, but he’ll owe his life to the wardens. Payment of any kind is costly, especially when he’s at risk of losing his heart to the man who saved his life.
THE COG. Caris Dhemlan hears the siren song of clarion crystals better than anyone in Ashion. That skill for inventing has enriched her bloodline, but it’s who she can become that will ultimately entangle her with the Clockwork Brigade.
THE PRINCESS. Eimarille Rourke should have been raised to be queen of one country; instead, she is prisoner of another. Guided by a star god, Eimarille bides her time in a gilded cage, spinning a political web to gain a throne and start a war the world isn’t ready for.
From the author who brought you the Soulbound series comes a queer steampunk-inspired epic fantasy.
SNik's Review:
First in series (Infernal War Saga). Paranormal fantasy adventure with steampunk and magic elements.
Multiple POV’s.
The Prince's Poisoned Vow starts out with an immediate introduction to many key players and progresses over several years with a big world build and divine machinations. It was a slow start for me due to the multiple POV’s and trying to understand all the characters' individual histories, but as the story progressed I was very invested and engaged in where this book slowly unraveled an epic storytelling.
There are several couplings and each couple brings layers of romance, love, duty, loyalty, sacrifice and heartache. I will be saddened if any of the main “hero” characters end up as cannon fodder for the story progression as I enjoyed them all.
Plenty of action and intrigue and characters to root for, tremendous start to a new series.
Rating: 4.5 Stars
Jacqueleen the Reading Queen's Review:
Holy shit Batman.
I have no idea how to write this review. I feel like I need a drink after finishing.
This book is LONG. And there are about 25 different POVs and a TON of different storylines to follow. It's well written, don't get me wrong. The worldbuilding is top notch as is par for the course with the worlds Hailey Turner creates.
Think Game of Thrones set in a dystopian world with steampunk elements and meddling gods.
I had to keep notes on my phone so I could remember certain characters identities at first. Children are moved around like chess pieces. It's a dangerous game many are playing and I'm not sure if anyone will actually be able to say they truly won at the end of the trilogy.
Rating: 4.5 Stars
The Prince's Poisoned Vow is currently available in e-book and paperback and can be read as part of your Kindle Unlimited Subscription
4.5 stars ARC Fantasy Jacqueleen KU mm and ff multiple povs Series SNik steampunk