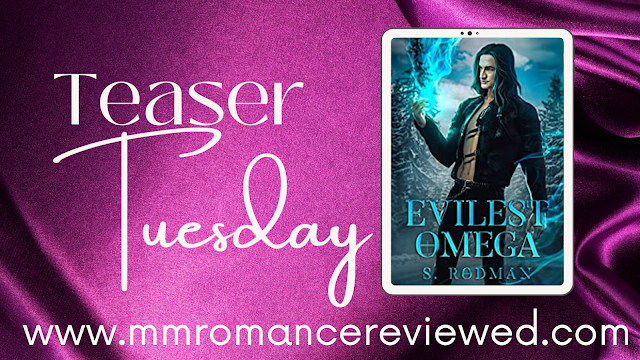 There was a bit of a mad scramble in our Review Team Facebook group when S. Rodman requested reviewers for Evilest Omega and after seeing the teaser below, I understand why...

Evilest Omega is the follow up to Evil Omega and will release on May 14th, giving you just enough time to grab the first book and catch up before it arrives! 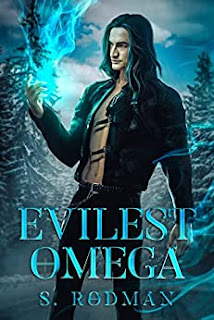 Silas Darkstar is a powerful necromancer, an aspiring supervillain, a wolf shifter and an omega. After years alone as an outcast, he is enjoying life with his mate Dean and the pack they have created.

Sure, they are on the run from the Council and as the only magic weaver, a lot falls on his shoulders to keep them safe. But his found family is worth it.

This pesky dagger, brimming with dark magic that he found in an abandoned mine, isn’t anything he can’t handle. He can ignore its siren call.

But Silas’s powers are growing and they are darker than before. Dean is worried. Silas is not acting like himself. He is cold, distant, even more ruthless than ever. Unpredictable.

Dean knows he needs to do something, but the idea breaks his heart.

Meanwhile, the Darkstar pack is growing in the most unusual way. It appears there is going to be the pitter patter of mothman baby feet. The pack is ecstatic.

But can Dean keep them all safe? The Council is closing in and while Silas seems to be dispatching them one by one, what price is the dark magic extracting?

Can Dean protect Silas from himself?

Will he have to choose between Silas and the pack and keep them safe from him?

He knows making such a terrible decision will destroy him.

However, it may just be one he has to make.

Or does he put his faith in Silas and trust that love can conquer all?

Silvanus snapped his attention to his son and grinned, “Come here and surrender.” He pulled out a pair of iron, magic binding cuffs from his pocket, dangling them like they were a tantalizing treat.

Dean held his breath. He didn’t know what to think. He remembered the night the Council had captured him, Brendan, and Jasper and hung them from a tree. Silas hadn’t given himself up then, but he had regretted his decision with all his heart and soul.

What would he do now? Would he surrender? Did Dean want him to?

Which was worse, Isaiah being taken away, or Silas? Silas, howled his wolf, desperate to save him. Isaiah, said his mind, knowing how much stronger the necromancer was, and how much more likely to escape. Hell, one of the things everyone had always said about Silas was that no one could keep him for long.

It wasn’t his decision to make though, and he watched helplessly as Silas strode up to his father, holding his wrists out together in front of him. No trace of doubt or hesitation were to be seen in the set of his shoulders, or in his confident stride.

Silas had obviously seen that there was no other option. One of the betas holding Isaiah held a knife in his other hand. It would take seconds for him to kill the omega, too fast for any magic attack to stop him. Dean hated that he agreed with his mate’s assessment.

Silvanus smiled smugly as Silas stopped before him. He clicked the cuffs into place and Dean saw the tiniest flinch from Silas.

The Alpha tilted his head in a gesture to his betas and they shoved Isaiah forward. The omega nearly fell on his face, but quickly caught himself and ran to Dean. Isaiah clung to him, burying his head against his chest, as Dean wrapped an arm around him and squeezed reassuringly. He was safe now.

But Silas was not. Dean felt his blood turn to ice, his mouth suddenly dry. This couldn’t be happening.

The Alpha snarled in rage and slapped Silas hard, knocking his head violently to the side. Dean felt many strong arms holding him back as he strained against them. Blind rage burned all sense from him. Attacking now was pointless, they couldn’t defeat the Northstars, but his wolf wanted to destroy the man who had hurt his mate.

Silas turned his head and calmly spat out a mouthful of blood. “Now I’m remembering why I have daddy issues.”

Evilest Omega is the sequel to Evil Omega, which shows the main characters falling in love. Therefore, you may find it more enjoyable to read Evil Evil Omega first.

Mpreg is not a usual part of this world, but a secondary character experiences an egg Mpreg and an on-page birth.

High angst. Medium heat and knotty. Happy Ever After guaranteed.

Order your copy of Evilest Omega today!  It will also be available to read as part of your Kindle Unlimited Subscription