Review: Beyond the Surface by Colette Davison 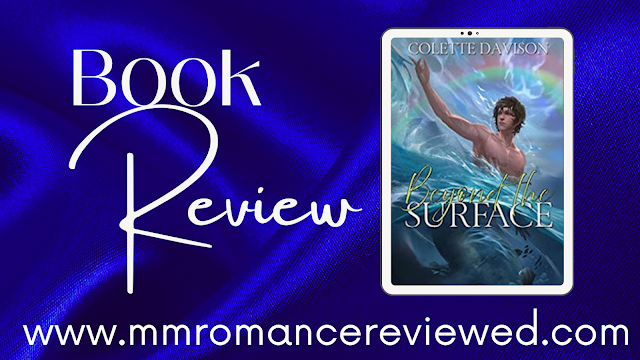 "What would you do if you got rescued by a merman? That's what Steven is trying to figure out for himself. Was he actually rescued by a merman? Or was he just hallucinating?" Angel gives us their first review for the blog of Colette Davison's Beyond the Surface.
From the Blurb:
Raen has always longed to see the world beyond the surface, but nothing could compel him to break the most ancient law of the merfolk. Could it? 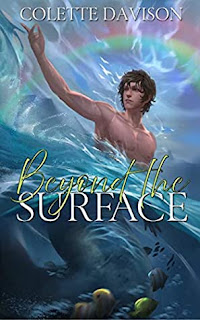 Raen should have found his mate during his first hunt, instead he almost died. Two years later, he’s struggling with internal fear, and his father’s disapproval.
Until he encounters a land-dweller.A man he feels a deep and instant connection to.
A man who will drown if Raen doesn’t save him.But in order to do so, Raen must break two of the merfolk’s rules:
Don’t interact with land-dwellers.
Don’t go beyond the surface.
If Raen saves the man, he stands to lose everything he’s ever known. But if he lets him drown, he’ll lose something infinitely more precious to his heart and soul.
Beyond the Surface is a paranormal MM romance, with fated mates who almost never met, a sweet insta-love relationship, and an age-gap.
Angel's Review:
That's the same question Steven is asking himself after being saved by one. Or at least he thinks he was.
Steven needs to get away from London. And from his sister. She means well but he's tired of her nagging on him, all he wants is time to himself. So, he rents out a little cabin on an island in the middle of the ocean. Little did he know that he would fall in love. He arrived on the island for relaxation after surviving leukemia and he didn't expect to almost drown his first night there. After that night everything changes.
Raen is a merman who has spent his whole life under the sea. He only sees the sunrise and sunset from below the water, he's always been curious about the surface. Are colors different up there? Are they brighter? Are there colors that he's never even seen? He has all of these questions and yet he can't bring himself to break the most ancient rule of the merfolk. Don't interact with the humans. At all. Raen knows the rules and yet when he sees a human who's about to drown he feels like he  needs to help him. He can't just let that human die,  right?
Wrong. As soon as he made the decision to save that human his life changed forever. He no longer has a tail or the ability to project his thoughts and emotions. He has nothing he once had. But he gains everything he didn't know he needed... Well, almost everything.
I wish we, as readers, got to see more of Steven and Raen's relationship with each other. I feel as though that there could have been more written about them as a couple. As much as I liked this book i do have a bit of constructive criticism and here it is: I would have liked there to be more about his brothers. What happened to his brothers after they broke the surface to save Raen and Steven? Did they get in trouble? Did they get punished like Raen did? I just wish that there was more of them in this book as well.
I've always loved the water, so reading a book about a main character who lives in the water is really interesting to me. I think the background and characters were written really well, I thought that the ocean elements were definitely more detailed than the on land description. But both were still very good. Overall, a really unique read. I definitely recommend Beyond the Surface to anyone who enjoys a merman finding his human mate.
Rating: 4 Stars
Beyond the Surface is currently available in e-book and paperback and can be read as part of your Kindle Unlimited Subscription
4 Stars Age Gap Angel Fated Mates InstaLove KU merman Paranormal