We have officially made it to the last book in the Ashes & Dust series where Evan finally gets his well deserved HEA. I'm sad to say goodbye to this world and the characters in it, but happy to know Evan finally got his man.
From the Out of the Ashes blurb:
Don’t miss the conclusion to this riveting and romantic spin-off series from Jenn Burke, author of Not Dead Yet. 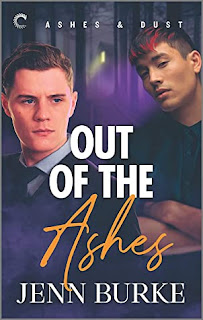 Some bonds weren’t meant to be broken.
Vampire PI Evan Fournier has dealt with his fair share of danger and heartache, but nothing prepares him for the pain of a broken bond with his mate—especially when his mate is the one who severed it. Bond or no, he still loves Colin—fiercely. Trust, however, is harder to come by. And when a demon starts terrorizing paranormals in Toronto, trust in one another is exactly what they’ll need.
Former firefighter turned crime-fighting phoenix Colin Zhang knows who Evan was—is—to him, but he doesn’t know if he can give him what he wants. He just needs a little time to figure things out. Unfortunately, bringing down a demon bent on mass murder leaves little time for anything else.
The only way they’ll destroy the demon is by teaming up with an unlikely partner to infiltrate a gang of terrorists. But the only way they’ll save themselves is by finding a path back into each other’s arms—and hearts—once again.
Jacqueleen the Reading Queen's Review:
I have loved Evan since he first appeared in the Not Dead Yet series. He's just such a sweet, kind hearted character. There was no way readers wouldn't take to him. As his own 3 book series evolved Evan was definitely put through the ringer. His love interest Colin didn't make it easy on him either. Internalized homophobia and the shock of the paranormal were major hurdles Colin needed to jump over before he could truly make a go of it with Evan.
Speaking of hurdles, the last book ended with a major one. Colin had broken the bond between him and Evan, leaving Evan with an emotionless Colin who didn't remember the feelings they shared. My heart broke for Evan and raged at Colin. I understand why it needed to be done, but how could anyone stomach hurting my sweet Evan! On top of dealing with having to remind Colin why they loved each other, there was also the case of a demon terrorizing the city along with a group of paranormal haters. Thankfully after a few very close calls things worked out in the end. The major threat was neutralized and the vampire finally got his phoenix for good, along with a stepson to boot.
Rating: 4 Stars
Out of the Ashes is currently available in ebook.
4 Stars angst ARC Established Relationship Jacqueleen Paranormal PI Series vampire