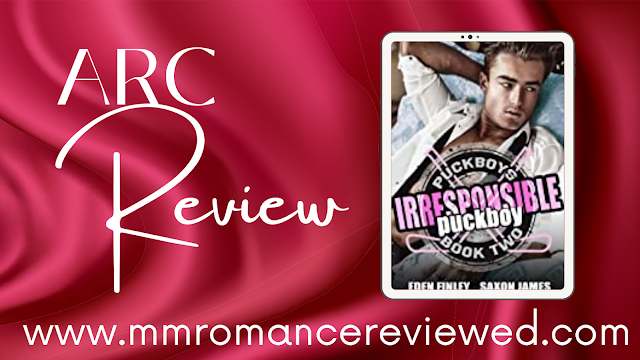 Saxon James and Eden Finley know how to write sexy, broken hockey players and they do it again with Irresponsible Puckboy...
From the blurb: 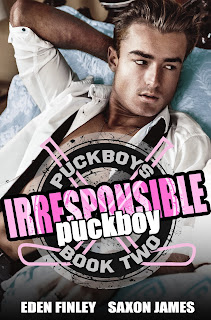 TRIPP
The worst part of being in love with my straight best friend is the fact he’s too oblivious to see it.
Years of pining have left me exhausted, and I need a break from Dex. I need space to get over my feelings. But when his relationship falls apart and he turns to me for comfort, I cave immediately.
If there’s one thing I hate more than being hurt, it’s seeing Dex struggle. I can’t leave him in a time of need, even if my friends say it’s my biggest downfall.
They say Dexter Mitchale is my weakness, but if that’s true, I don’t want to be strong.
DEX
I’ve always been the dumb one. It’s what I’m known for, and usually I don’t let it get to me.
I have hockey, and I have my best friend, Tripp. What more do I need? To settle down? No thank you. Marriage? Hard pass. According to ex-girlfriends, that makes me “irresponsible.”
But the solution I come up with to get over my fear of commitment might be my dumbest idea yet. Not only does it have team management breathing down my neck, but it puts a strain on my friendship with Tripp.
This PR nightmare could lose me the only person I’ve ever loved. Losing girlfriends is nothing. Losing Tripp? It’s not an option.
I’ll do whatever it takes to keep him.
Jacqueleen's Review:
"I'm his best friend.
He's my heart and soul.
And nothing will ever change that.
Not even his inability to love me back."
Irresponsible Puckboy was just absolutely adorable. Dex, sweet, naive, particularly slow on the uptake Dex was so freaking lovable. It's no wonder Tripp fell for him almost immediately after meeting him. His sunny personality and unwavering loyalty to his best friend was so earnest and heartfelt. I loved watching him figure out his feelings for Tripp and not only because they both fit together perfectly. It was just cute. Nothing truly changed between them except the fact that now they gave each other orgasms.
Ironically Dex jumped right in with both feet, while it was Tripp who had the most reservations. While Dex is thinking this is the start of a beautiful relationship, Tripps convincing himself that it's all temporary. It's hard to believe you can have everything you've ever dreamed of without being slightly wary. You'd think the hott AF sex they were having might have clued Tripp in a bit more. Dex isn't the only one in their relationship that misses the obvious.
As usual the Queer Collective was a barrel of laughs. I love how protective they are of each other, yet constantly give each other shit. I have a strong feeling Oskar is going to be the next Puckboy to find his forever. Talk about a PR nightmare. Not only do they have to deal with Oskars kink for hooking up in public, but also the fact that the PR manager himself is who Oskar has set his sights on. This oughtta be fun.
Rating: 5 Stars
Heather's Review:
Dex is a classic Himbo - sweet, naive and kind of drifting through life and relationships - knowing what he doesn't want, but not able to articulate what he does... and it's adorable for everyone except Tripp - the guy who is not only his best friend but who has been in love with him for years...
I love how quirky their relationship already is and how blind they are to what is really happening - until practice married becomes really married... and they need to stay together and not see other people to maintain the goodwill of their fan-base...
This book was all parts sweet, funny, steamy and included amazing cameos from the Queer Collective guys that helped move the story along and also ramp up my interest in the future books still to be written for this queer hockey family...
This book was a quick read for me and I couldn't put it down... I do recommend reading the series in order, but honestly Irresponsible Puckboy can stand on it's own until you are compelled to go back to read Egotistical Puckboy...
Rating: 5 Stars
Irresponsible Puckboy is currently available in e-book and paperback and can be read as part of your Kindle Unlimited Subscription - you can also check out the Release Blitz post and giveaway by clicking on the graphic below: 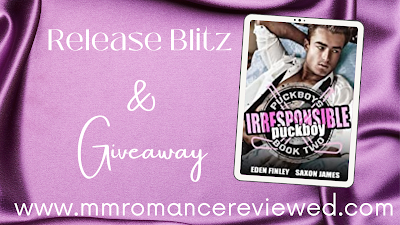