The Guilty Canvas by Daniel May 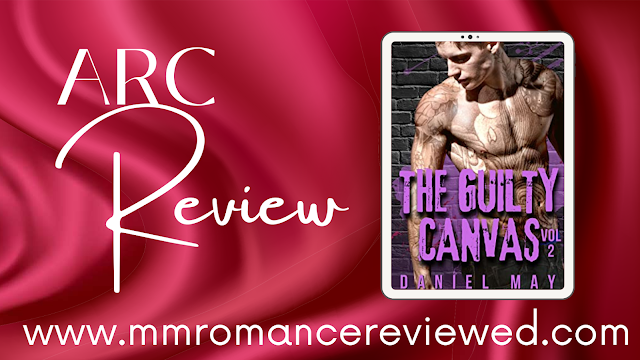 Guilt is definitely the right word to sum up the 2nd volume of this trilogy...  all three characters explore and dig deeper into themselves, especially Trinket and Zee...
From The Guilty Canvas blurb: 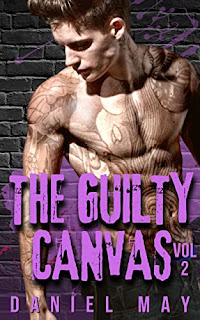 Stepping out on his boyfriend has become a habit.
When Zee goes out of town for work, Trinket leaps at the chance to spend a month with side piece Mini. The BDSM-savvy, dirty-talking tattoo artist continuously ups the ante between them — first showing Trinket what it’s like to be really dominated in bed, then surprising him with deftly tender aftercare, and, finally, challenging Trinket to reexamine his feelings about himself, and his relationship.
Trinket hasn’t known anyone as long as he’s known Zee.
In all his little moments of doubt, handcuffed in a strange apartment or screwing around in an alleyway, Trinket can say with confidence who the problem is in their relationship. He sees the cracks in the facade, but attributes them all to his own damage. His own issues with vulnerability. His confusion in bed and out of it.
Trinket is blindsided when Zee returns home with a harrowing confession.
In Trinket’s struggle to understand and cope with this new twist, he turns to Mini, who has become so much more than the dom on the side. Trinket doesn’t realize exactly how much he has come to rely on Mini for reassurance, for laughter, as an easy alternative to his complicated relationship, until those texts suddenly stop.
It turns out that all three men have their secrets… some more dangerous than others.
The Guilty Canvas is book two in a high heat, slow burn MMM trilogy with a happy ending. The books follow the same story and cannot be read as standalones.
This trilogy was originally published as a series of seven books: A Taste of Ink, Lost in the Linework, A Guilty Canvas, A Stanza on Skin, A Darker Palette, The Color of Need, and A Final Stroke.The Guilty Canvas contains content from the fourth through sixth books. The series has been lightly revised, with a few small changes and an extended ending in the third book.
Heather's Review:
I had a hard time settling into The Guilty Canvas - the beginning is super hot, but I wasn't feeling the pull of the characters or an advancement of the story so I set it aside for a day and went back to it... and boy am I glad I did!  So much happens between Mini and Trinket to solidify their ties to each other... and then Zee comes home early and wow... no spoilers, so you'll have to read it...
By about 40% I was fully invested again and the layers of Trinket's relationships with both Mini and Zee started peeling back... I raced through the book and can't wait for the third volume!
Once again, if cheating, humiliation or BDSM are triggers for you, you'll want to give this series a pass... but if you're looking for a super steamy exploration of what makes relationships tick, start with the first volume, A Taste of Ink, before diving into this book!
Rating: 4 Stars
Reading To Stay Awake's Review:
This series just gets better and better! Again, I can't put into words what I want to say about this book other than you need to read the series from the start and take note of trigger warnings.
I am loving this series but wouldn't recommend it to all my friends, they just wouldn't get it but the ones that would will love it!! xx
Rating: 5 Stars
4 Stars 5 Stars BDSM cheating Heather high heat Reading to stay awake Series steamy