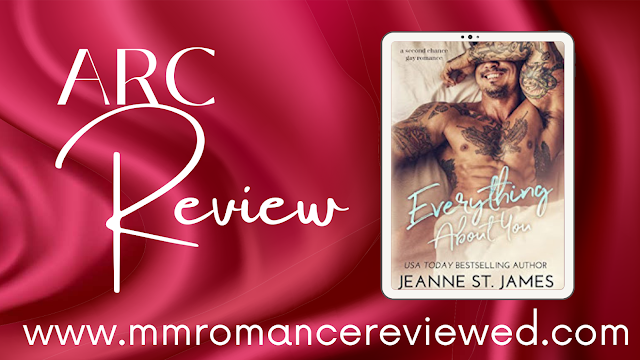 Janet called Everything About You, "a true love story." Saying that, "the past and the present merge in this fantastic second chance story. This story mesmerized me, hooked me, sucked me in and didn’t let go." and Jacqueleen says "It was worth everything."
From the blurb:
It was your smile. 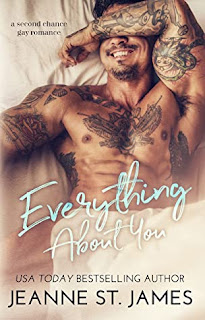 Your laugh.
The color of your eyes.
The way you looked at me when no one else was looking.
The way you held me.
The way you kissed me.
It was everything about you I loved.
The flattening of that smile.
The silence of your laughter.
The loss of your lips.
The distance you created.
The way you left.
The way you destroyed it all.
The way you destroyed me.
Destroyed us.
It was everything about you I hated.
Everything about you.
I wanted.
Needed.
Hoped for.
And that day you not only broke my heart.
You f*cking crushed it.
Note: Everything About You is a standalone gay (M/M) second chance romance. As always, this book does not have cheating or a cliffhanger and an HEA is guaranteed.
Janet's Review:
Everything About You is a true love story. The past and present merge in this fantastic second chance story.
Everything About you mesmerized me, hooked me, sucked me in and didn’t let go. This was an outstanding second chance love story. We are given Tate and Ronan’s story in past and present installments with both POV’s.
At first, I wasn’t sure if I’d like the dual POV’s within the past and present, but I quickly realized that it was much needed to tell their story.
They start as friends to lovers that falls apart, I felt both their pain, anger and frustration. The angst in the story was overwhelming at times as they had a soul deep connection that you could feel.
The writing was phenomenal, and the pacing was excellent. Ronan and Tate are deeply flawed, complicated and complex. The character building was well done.
This is one that I’ll definitely reread numerous times.
Rating: 5 Stars
Jacqueleen's Review:
"The memories you wanted to hold onto the tightest tended to fade away the quickest. The memories you wanted to forget tended to haunt you forever."
Everything About You is my first book by Jeanne St. James so I didn't really know what to expect going in. I have to say it was the blurb that really grabbed me. (The hot AF tattooed man on the cover also helped.) I could already feel the angst and I was sooo ready. What I got was a powerful love between two men, so powerful, that even when one of those men betrayed the other in the most devastating way possible, the love was never lost. It may have been buried beneath mounds of guilt and self hate, or behind solid steel walls, but it was still there. It was still there waiting for a single spark of hope to light it back up even brighter than before.
"I had him for almost 2 years. I dreamed about him for twelve more."
The book is told in dual POV both in the present and flashbacks from the past. That was one of the things I loved about this book. It told the story of their present, while slowly revealing the events of the past that led them to where they were today. Discovering love and then finding it again 12 years later simultaneously. It wasn't an easy story and I had a really hard time liking Tate after finding out what he'd done. Yes it seemed he also suffered after that fateful day that ruined them, but Ronan was right in not having too much sympathy for him over it.
"Don't forget it was a life you chose, Tate. You have no one to blame but yourself."
And blame himself Tate did. For 12 long years he lived a miserable life until one day he couldn't take it anymore. He purged his sins and decided to start again. He moved back to the city he loved, the city where he fell in love. What he didn't do was expect to move into the same building as the man he had fallen in love with. Ronan sure hadn't expected to run into the man who had shredded his heart in the lobby of his home. Once again they were in each other's orbit and neither had the strength to walk away from this second chance. The road to forgiveness was certainly a bumpy, steam filled ride. But in the end, it was worth it. It was worth everything.
Rating: 5 Stars
Everything About You is currently available in e-book and paperback and can be read as part of your Kindle Unlimited Subscription
5 Stars angst ARC Contemporary HEA Jacqueleen Janet KU second chance Standalone