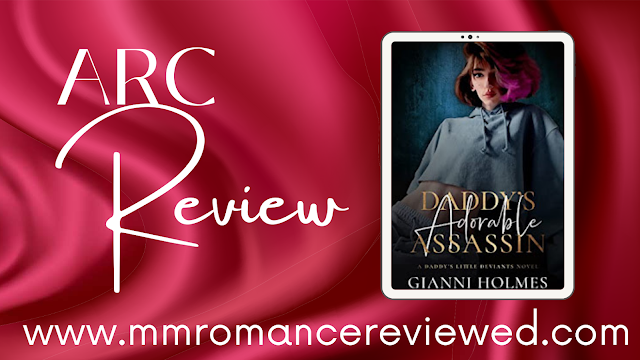 Wow, Daddy's Adorable Assassin was just so deliciously dark and dirty! There are definitely some trigger warnings so if you have concerns, you should make sure you read these first! This book is the second in the series but can absolutely be read as a stand-alone as it features completely new characters.
From the blurb: 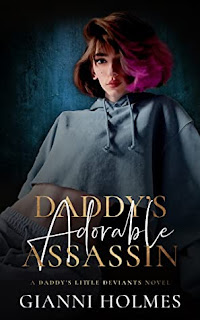 I’ve dedicated my career to hunting him.
A faceless criminal who’s been dropping bodies for six years. The only man who might be able to lead me to the remains of my late wife.
But now that I’ve got him, I’m conflicted about what to do with him.
Cosmo is nothing like we expected. From his soft hair and slender frame, to the innocence in his dark eyes.
He’s shut himself down in little space and only asks for his Daddy.
The bureau wants me to step in and pull him out by getting him to trust me as his new Daddy.
Little did they know they just condemned me to loving this adorable assassin. Now I’ll do anything to keep him from being locked up behind bars.
Anything…
Daddy's Adorable Assassin is a sweetly dark Daddy kink romance that stands alone in the Daddy's Little Deviants world. There is no connection to previous book(s).
Reds Book Reads Review:
I adored Daddy's Adorable Assassin and once I started I didn’t want to put it down. This is probably one of the darker books I have read from this author but it is oh so good!
Hunter is a police detective who has been building a case against a killer known as the Handkerchief Killer for the last 10 years. He is suddenly contacted by the FBI who say they have caught the killer and he is taken to a blacksite to assist with the investigation. Whilst there, he meets Cosmo who is deep in little space and won’t respond. What happens next will dramatically change both of their futures.
I loved how well written these books were and the twists and turns kept me guessing right until the end. It was so clever how Hunter and Cosmo changed throughout the book and your could really feel Hunters decent into obsession as the story progressed. I just loved this book so much!
Rating: 5 Stars
Lesetiger's Review:
I don't know the first volume, but that doesn't matter, because you can read this book well as a standalone.
I really liked the writing style, it was captivating and once you start reading, it's very hard to put the book down.
The story is dark and intense, but exciting and with some unexpected twists. The characters are intense and have been through a lot in the past.
I liked the police officer Hunter from the beginning. He has a clear goal, as he has been hunting a serial killer for 10 years. Cosmo is a Little that the FBI has arrested and can't get a word out of. The only thing that is certain is that he is somehow connected to the murders. But he is too young to be the killer himself. Cosmo is intelligent, but extremely manipulative.
Hunter and Cosmo's relationship is marked by obsession. The characters are not black or white, they are gray and drawn in many layers by the author. And they change, as Hunter's friend has noted. Hunter goes from being a straight law-abiding cop to a caring daddy who can get very rough and tumble in between. Cosmo is very special and at times I would have loved to shake him.
An interesting and fascinating story - I will be looking for more books by Gianna Holmes.
Rating: 4 Stars
Daddy's Adorable Assassin is currently available as an e-book and can be read as part of your Kindle Unlimited Subscription
4 Stars 5 Stars ARC Contemporary Daddy darker themes KU Lesetiger Reds Book Reads Standalone