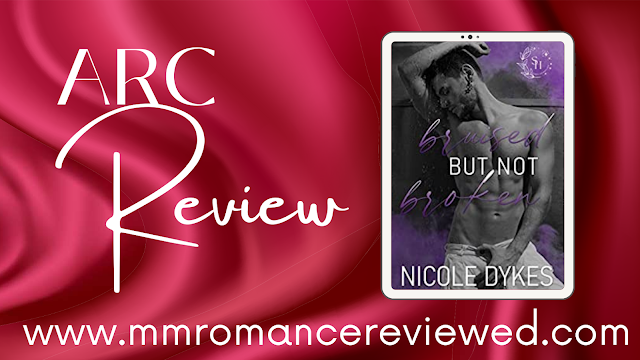 "He's not broken. Maybe he's a little bruised up like the rest of us, but he's far from shattered." Bruised But Not Broken.
From the blurb:
Ben
Spark of Hope: A bi-weekly trauma support group.
This is my nightmare. When I think of a support group, I think of sad people sitting around talking about their feelings and nothing changing. 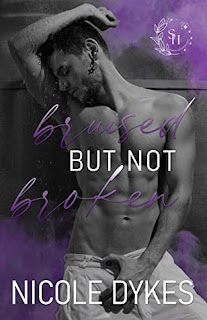 And yet, when my brother and his best friend, who happens to be a therapist, presented the idea of holding the meetings at my gym, I caved.
Because I, Benjamin Price, have always tried to rescue the people in my life. But I can’t. I’ve usually failed them.
Now, I’m hosting a trauma support group and desperately trying not to fall into my old habits—of attempting to save everyone.
And then, he walks in.
Bruised. But not broken. No matter how exhausted he may feel, a strength in him calls to me.
And there’s no way I can ignore the need deep inside me to at least try.
Colby
I’m tired. I’m afraid. And I don’t want to go back.
Not to the abusive relationship I told myself I was okay with for years.
But what am I supposed to do?
I have no real life skills. All my life, I’ve been told I’m pretty and that’s it.
Then I walk into a gym, looking for a job, but I find so much more.
I don’t want to trust Ben. I don’t believe his help doesn’t come with a price.
But what choice do I really have?
One thing’s for sure . . . Neither of us are getting out of this intact.
What we lose though, that’s anyone’s guess.
***Bruised But Not Broken is set around a trauma support group and will, therefore, touch on extremely sensitive subjects. I’ll always do my best to handle these topics with care and healing, and with no intention of hurting anyone. But please, heed this warning if you have any triggers.
Jacqueleen the Reading Queen's Review:
Bruised But Not Broken illuminates how trauma comes in many forms. It could stem from abuse or an accident. It could come from a close call. It could even be from something you witnessed happen to someone else entirely. There's no rulebook for what is deemed traumatic. What might be for some, isn't for others. Nicole Dykes handled this topic with the care it deserves, while also telling us a beautiful love story brought on by healing and friendship.
Ben is a savior. He's also one of the kindest MCs I've ever read. His empathy is strong, so strong that sometimes he takes too much onto himself. Not everyone wants to be saved. Others just want to be the one to save themselves. That's Colby. At the start he feels leery of Ben's kindness. After getting to know Ben more, Colby's leeriness turns into feeling unworthiness. How could someone like him deserve a man like Ben in his corner?
As Ben and Colby get closer, Colbys self esteem gets higher. Their friendship grows everyday and they share things with each other they've never told anyone else. Slowly but surely the healing begins. Then the romance does. It was definitely a slow burn steam wise, but that was important for this book. Colby needed to learn to love himself, to trust himself. Ben needed to let Colby thrive on his own. When they finally got together, both were surprised with how easy it was. They slotted perfectly with each other and I think that's truly because the friendship and trust came first. It didn't matter that Ben had never been with anyone but his ex wife. Colby made him happy, that's all that mattered. Somehow, he made Colby happy too and I just loved how it all played out.
We get a little teaser for the next book and I have to say I can't wait. Roman was such a funny side character. I loved how he liked to bust Ben's chops all the time. I'm hoping Andrew and Ethan get their own books too. So many likeable side characters. Never a bad problem to have!
Rating: 4 Stars
Bookish.jka's Review:
Friends to lovers, hurt/comfort, bi-awakening, angsty deliciousness, all rolled up into another fabulous read from the divine Ms Dykes.
"This thing with Ben? Yeah, it's so much more than a crush. It's going to be my utter destruction.""
Bruised But Not Broken is the first in the Spark of Hope series by Nicole Dykes, which is set around a trauma support group.
This is Ben and Colby's story.
Ben is the owner of a gym, which is about to start hosting a bi-weekly trauma support group called Spark of Hope, the brainchild of his cop older brother and his best friend. Ben has recently separated from his wife of 10 years.
Colby is also newly separated - from an abusive, rich, older boyfriend. He finds his way to Ben's gym, which is looking for a new team member.
Bruised But Not Broken follows Ben's bi-awakening and their blossoming romance, alongside both of their gradual acceptance and understanding of their individual traumas, and what they need to move through their experiences. Together.
Angsty, steamy, cute. So, so lovely.
Rating: 4 romantic stars
Heather's Review:
What happens when you put a man with a hero complex together with a man who needs a hero and add in a dose of healing therapy?  You get an emotional rollercoaster of a story with hurt/comfort, slow burn, missteps, miscommunication and of course steamy heat!
Nicole Dykes always writes multi-faceted and dynamic characters and Ben and Colby are no exception.  Even with the difficult themes and emotional scenes, Bruised But Not Broken was a book that read quickly, but stayed with me...
Rating: 5 Stars 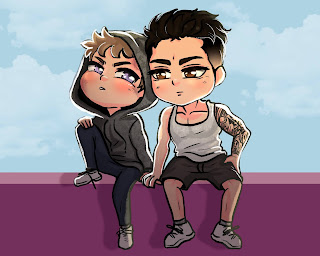 Sarah C's Review:
Nicole Dykes hits it out of the park with her first book in the Sparks of Hope series, Bruised But Not Broken. This book does great in introducing not only Ben and Colby and their romance, but the Sparks of Hope group that will be the foundation for the entire series. She also does an amazing job with showing that there is more than one way that people deal with trauma. That said, there are triggers in this book that absolutely NEED to be heeded.

But let's get into the meat and potatoes of the story.

Ben is a gym owner. When his brother's best friend comes to them with a proposal, he's hesitant. A group therapy meeting, twice a week, at his gym with Ben and Roman teaching self-defense after. He's not a believer in therapy and thinks the whole group therapy thing sounds kind of cultish. But he allows it, mainly because he has a saving people thing. It showed with his ex-wife and it shows again when he meets Colby outside of his gym and offers him a job and a place to stay within just a few minutes of knowing him.

There's reasons that Ben is like that, why he has a saving people thing, and it is explained throughout the course of the book. And it is heartbreaking, his past trauma. However, the book doesn't focus a lot on that, leaving me to believe that we'll see more of that history in his brother's book.

The relationship between Colby and Ben grows relatively quickly. There's an instant attraction and they begin to bond in after hour visits. Colby, despite his bad history with a very recent ex-boyfriend, develops feelings for Ben very quickly and Ben, despite a recent divorce and always thinking he's straight, develops feelings back just as quickly. I do like that Ben doesn't go through some crisis in his bisexual awakening. He just accepts that he has feelings for Colby and that maybe they were always there but he never noticed attraction to men because he'd gotten with his wife when he was still in high school.

The romance between them is very sweet and despite the speed of them falling in love, feels organic. The characters themselves seem very three dimensional and once again, Nicole proves that she is amazing at her characterizations with her side characters as well. Everyone from Ben's ex-wife to the people who work the front desk of the gym to the other group members feel real and developed and I found myself invested in all of them.