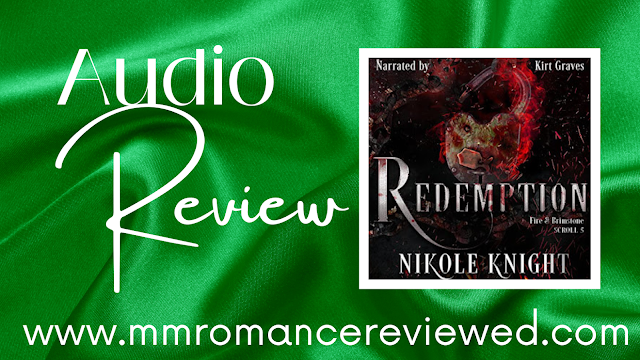 Redemption was a roller coaster ride of emotions, literally once to hell and back for me - my poor heart! A get some tissues read.
From the blurb:
Riley is missing, and it’s up to his angels to find him. 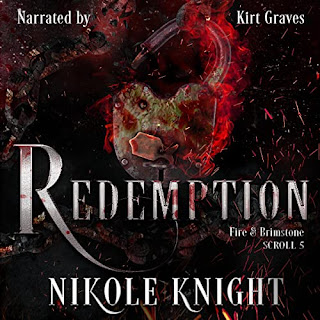 With help from their allies, Gideon, Jai, and Noel fight to locate the missing piece to their family—and their hearts—before they lose him forever. Realms will topple, and worlds will burn. Because they will not stop until they get him back.
But for Riley, time is running out. Trapped in the cursed realm, Riley Shepard finds himself at the mercy of the Seven. With no friends and no hope, he struggles to survive the horrors of hell as he battles the inevitable pull to the darkness residing inside himself. But one way or another, he must face his demons or die trying. If only death was so easy.
Redemption is the fifth book in the M/M+ harem/poly romance series Fire & Brimstone, featuring vengeful guardian angels, dark affairs, torture, betrayal, and an unlikely hero who must sacrifice everything to survive.
Trigger warnings include: violence, intense gore (specifically Chapter 12), torture, non-graphic sexual assault, and death.
Lesetiger's Review:
Yes, I am addicted to this series. Redemption is the fifth volume and this one is darker and grittier than the previous ones, but extremely captivating from the start. Absolutely fantastically written and brilliantly narrated.
This was a roller coaster ride of emotions, literally once to hell and back for me - my poor heart! Get some tissues ready.
I don't even know where to start, but this volume was also very intense and, like the volumes before, had great character development. I had a hard time turning off the audiobook because I really wanted to know what would happen next. A page-turner that I listened to in two days! I love the story of Riley and his angels and in each volume we get to know them a little closer and more intense.
Kirt Graves is a fantastic narrator who reads every ounce of emotion. You can directly feel Riley's pain, but also the sadness, the discomfort, the impatience, the desperation of his angels. This was absolutely brilliantly done.
A heartbreaking, emotional and captivating audiobook that is a must listen if you are a fan of the series! And now I'm impatiently waiting for the final volume, and I'm doing so with one eye crying and one eye laughing. Crying because then I'm sure very sad that a wonderful fantasy series comes to an end, laughing because I can not wait to listen to the sixth volume.
Overall: ⭐️⭐️⭐️⭐️⭐️
Performance: ⭐️⭐️⭐️⭐️⭐️ ️️
Story: ⭐️⭐️⭐️⭐️⭐️
Rating: 5 Stars
Redemption is currently available in Audiobook, e-book and paperback and can be read as part of your Kindle Unlimited Subscription