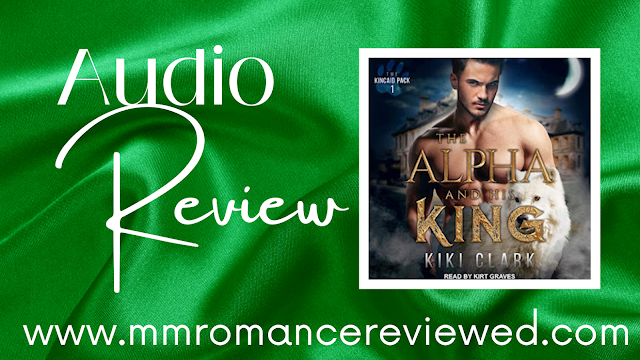 Lesetiger calls The Alpha and His King, "Great start to a paranormal series - Kirt Graves did a great job as narrator as always!"
From the blurb:
When Kai flies out of a shed, swinging a rake, Rick's life flips upside down. 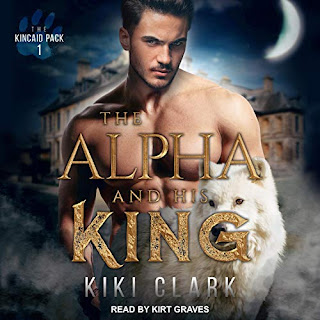 As alpha, Rick's dedication to his pack has never wavered - until Kai. The pull he feels toward the younger man is more than a simple distraction, but Rick won't let himself lose focus. Not while a hidden enemy is drawing near.
Moving in with the grumpy alpha who saved him is a big change for Kai, and it isn't long before he begins to ache for something he can't have. As a half-human shifter responsible for his three younger siblings, he knows he can never be Rick's mate.
Pushing aside their doubts and insecurities, they grow closer. But when the pack's enemies strike, bringing their fears to fruition, Rick and Kai have to decide if they're willing to risk it all to be together.
Contains mature themes.
Lesetiger's Review:
The Alpha and His King was the first book in a fantasy series I've read by Kiki Clark, so I had no particular expectations, I just wanted to be surprised by what was to come.
The writing style was wonderful and so I found myself very quickly in the story of the Kincaid Pack. This begins excitingly with the banishment of the Kings, after they have stolen from the pack leader Rick. Because during this action, the children locked in a shed are discovered.
The world-building was interesting, because not only shifters live in the Kincaid Pack, but also witches and seers. I also really liked the character development and besides the two likeable main protagonists Rick and the oldest of the King children Kai, there are a lot of interesting side characters, some of whom we will hopefully get to know better in the next volumes.
With the King children living under Rick's roof, a romance is brewing between Rick and Kai that comes to a sudden end after a raid on the pack. Is this the final end or do the two still have a chance? Yes, it is a slow burn romance, but I still liked it.
Besides the usual problems in the pack, there are also some not-so-simple topics like abuse in childhood, violence and relationship fears. But in between there is some humor as well as finding their way in their new family, which lightens things up.
The audiobook was narrated by Kirt Graves and he did a fantastic job. I love how he gives all the different characters different and unique voices, so as a listener you always know who is speaking. He is also a master at rendering the emotions.
I was captivated from the beginning and am now looking forward to the next volume in the series!
🎧Audiobook Review🎧
Overall: ⭐️⭐️⭐️⭐️⭐️
Performance: ⭐️⭐️⭐️⭐️⭐️ ️️
Story: ⭐️⭐️⭐️⭐️⭐️
The Alpha and His King  is currently available in audiobook, e-book and paperback and can be read as part of your Kindle Unlimited Subscription