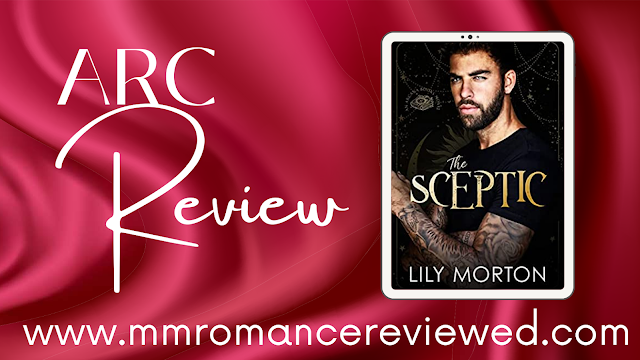 The Sceptic is a spin off from the Black and Blue series.  Will & Jem's story - ghost hunting and romance.
From the blurb: 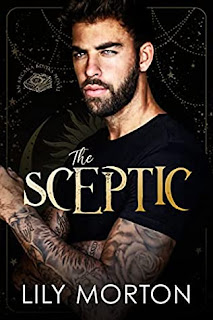 As the best friend of a psychic, Will Buchanan can’t help but believe in the dead. It’s the living that he finds to be problematic. However, after a spate of betrayals, he finally has the chance of a new life within his grasp, and he’s not going to risk it for anyone or anything. Staying safe is the name of Will’s game.
Jem Dawson defines the word temporary. A talented cameraman, he’s here today and will undoubtedly be gone tomorrow chasing adventure and danger. But, while he’s in York, he’s made it clear he wants Will, and Will can’t help liking the charming daredevil.
This inconvenient attraction results in Will accompanying Jem to the site of a notorious poltergeist outbreak. A malevolent spirit has targeted a family, and now the ghost hunting team for whom Jem does camerawork are going to be locked down in the house for three days.
The house is strange and filled with sinister and violent undercurrents. One by one, the group experiences threatening incidents, and as events escalate, Will has to ask himself if he's risking not just his heart but also his life with this impulsive gesture.
The Sceptic is the first book in the Arcana Books series featuring characters from the bestselling Black and Blue series.
Sheena's Review:
This is a spin off from the Black and Blue series, not going to lie but when I read that, I hoped we'd get more of Will at some point, and here he is in his own book. You could read as a standalone but I don't know why you'd want to, Blue Billings and The Quiet House are wonderful reads.
This was everything I hoped it'd be. Will is such a compelling character, I'm so glad we get this chance to know him better, and if anyone deserves good things, it's him. I thought there was a small spark with him and Jem when we first met Jem, and so it is. I love when it's opposites attract, and Will is so quiet and thoughtful, and steadfast and the perfect counterpoint to Jem's manic energy and headstrong character.
At its' heart though, this is a ghost story and it's a good one. Jem's group of ghost hunters investigating a poltergeist in a normal suburban house - and they're interesting too, I think we haven't seen the last of them. What a ghost story it is too, I made the mistake of reading this late at night with the lights out and it terrified me. Lily Morton has the ability to make me laugh, while scaring the bejesus out of me 😂
This book was all I'd hoped it'd be from Lily. It's funny, snarky, scary, yet left me happy and fulfilled with the story. In short, it's all you could want.
So if you want a romance with a fantastic paranormal story, with some heat and more than a little laughter, read The Sceptic (but read Blue Billings too because it's great).
Rating: 5 Stars
Janet's Review:
Holy moly!! The Sceptic scare the bejuesus out of me!!
The Sceptic is a spinoff from the Black and Blue series. I was so happy that the author was giving us more in that world. I seriously adored that series.
Will is living with Blue and Levi. Jem is a cameraman and asks Will to be a sceptic in a lock down at a haunted house. They kind of tiptoe around each other both are attracted to the other.
It was nice reading their friendship first with a nice progression into their romance. The story is one that you don’t want to read before bed, take that from me!!
The mystery/ghost story was well written. I can usually figure them out, but I didn’t with this one. Overall, Fantastic!!!
Rating: 5 Stars
The Sceptic is currently available as an e-book and can be read as part of your Kindle Unlimited Subscription
5 Stars ARC Ghost Janet KU Opposites Attract Paranormal Series Sheena spin off Standalone