A Teaspoon of Desire - Alex Danvers 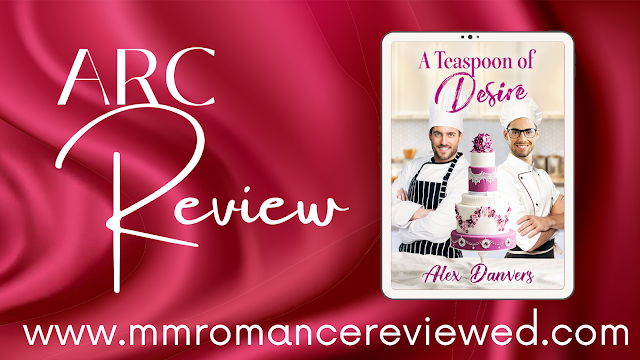 A Teaspoon of Desire: Two rivals both entering a new baking competition with half a million dollars up for grabs by the winner. "This sounds like a recipe for a winning book but I am really not sure whether the book rose the occasion (sorry, couldn't help myself!)." Reds Book Reads.
From the blurb:
As the competition heats up, these men need a recipe for romance. Tristan Delgado has talent. How else could he have landed a job working as a pastry chef for one of the most sought-after caterers in Seattle? What he doesn’t have is money. He’s barely making ends meet as it is, and when his sister escapes an abusive husband, he doesn’t hesitate to take her in. Twice the people means twice the mouths to feed, and Tristan is running out of options.
Henry Isaacson is cocky, and he’s okay with that. He has a job he loves, a successful pastry shop, and he’s been chosen to appear on Get Baked, an elite baking competition. This is his chance to prove he’s a cut above the very best and get the recognition he deserves. But his excitement soon deflates like a poorly timed soufflé when he encounters the last person he expects: his old rival, Tristan.
The prize money is just what Tristan needs, but once he realizes he’ll be competing against Henry, everything changes. Henry’s always been smug, annoyingly handsome, and even more annoyingly talented. Tristan can’t afford distractions, but the heat between them is undeniable. Someone will win, and someone will lose, but one thing’s for sure: they’re in for more than a dash of romance.
Reds Book Reads Review:
A Teaspoon of Desire is a really mixed bag for me and I struggled, not only with getting into the book but also with how to rate it.
There were some things that were really good and I loved the way we got to hear from both Henry and Tristan and we got to understand a lot about their history.
There were other things however that I struggled with. It wasn't always clear when there was a change between the POV and often that change would happen mid-chapter. It also made it difficult at times to work out who it was talking.
The book was a little slow to start for me but I love some of the twists and turns towards the end of the story as well.
Rating: 4 Stars
SNik's Review:
Standalone. Slow burn. Rivals to lovers. Dual POV. Foodies, bakers, and anyone interested in baking competition shows will enjoy this book.
A new baking show will have pastry chefs competing, and while they were already rivals in Seattle, Tristan and Henry are now competing for the prestige and prize money that comes with being on TV.
Attracted to each other physically, Tristan and Henry move from sniping at each other to a hook up that turns into spending time together outside of the competition.
There is a little background for both men but the story could have used more emotional communication and connection. There is no doubt that both Tristan and Henry love to bake and share that passion, which eventually leads to them enjoying the companionship and support between them.
Fun read with no major angst.
Rating: 4 Stars
Sheena's Review:
3.5 stars rounded up.
A Teaspoon of Desire was a first from this author for me. This is a slow burn, low heat, low angst book set during a televised baking competition. The two know each other already as they're from the same city, and have a little rivalry to start with as they got off on the wrong foot when they first met.
Don't read this if you're hungry, because there are lots and lots of descriptions of cake. All kinds of cake. Also pies, pastries and assorted desserts. This isn't a criticism, more an observation really. As it's set round a televised baking show (and really, who doesn't love those?) I expected some but there was a lot of highly detailed observations of food. I'd have preferred a little more focus on the characters, if anything.
This is a slow burn, both men have things to overcome before they embark on the relationship, and different reasons for doing the show. Tristan in particular has a lot of emotional things going on due to his past, and his present with his sister escaping a bad domestic situation and needs the money. Henry is doing it more for recognition for his business but they seem well suited for each other.
There's very little angst, and it's good to see the development of the relationship, especially Tristan opening up to Henry as things progress and they're really good together. I like how organically things developed between them and it never felt forced.
This was a good read, if a little slow at times and perhaps a little predictable but I enjoyed it on the whole, and would look for something else by the author in future.
Rating 3.5 Stars
Heather's Review:
A Teaspoon of Desire was a cute read with a baking competition reality show focus and a romance sub-plot.... and so you spend more time craving sweets, treats and a Croque Monsieur than you do reading about romance or steam, but in a way that's okay... if you know what to expect going in.
The whole book takes place during the filming of the first season of a reality show and has a slow build to the relationship and lots of food descriptions.  I found that because there was more food talk than relationship talk, that I was more invested in who was going to win Get Baked than if the relationship succeeded.
I did have some trouble with the changing POV - the author would change POV from one character to the other in the middle of chapters, but overall it was a fun read and if you're a fan of Great British Baking Show or any of it's spinoffs, you'll probably enjoy A Teaspoon of Desire...
Rating: 4 Stars
3.5 stars 4 Stars ARC baking Contemporary dual pov Heather Reds Book Reads Rivals Sheena SNik Standalone