The Moves We Make (Artists and Athletes #2) by C.D. Rachels 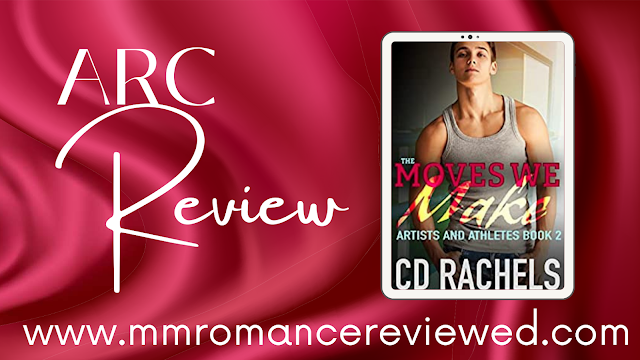 I really enjoyed book one in this series, but I've got to be honest and say that Landon really stole my heart in The Moves We Make. What's even more impressive is the fact that this is only C.D. Rachels 2nd MM book and it gets a well deserved full 5 stars from me. - Jacqueleen the Reading Queen 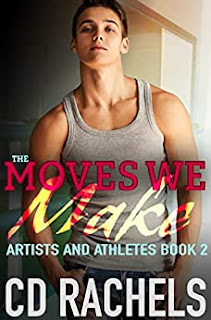 Landon
On my university soccer team, people see me as an obnoxious loud-mouth, but this semester, I’m turning over a new leaf. Part of that involves supporting my best friend and his new relationship (with a guy!). Ravi being gay has really thrown me for a loop. The way he looks at Steven, it makes me feel… jealous? I’m not gay, but no girl has ever made me feel the way those two feel about each other. To top it off, I’m forced to take my university arts requirement in the form of a dance class! I have to fumble around trying not to fail while the teaching assistant Dane refuses to take it easy on me.Still, the longer I spend in dance class, the more I get to know the real Dane: he’s fun, interesting, sweet, attractive, and… did I say attractive?! No way, that’s not what I meant. Because if I actually feel that way then… turning over a new leaf just got a LOT more complicated.

Dane
Dance is my life, and being a performing artist is my ultimate goal. That’s why I took this university TA position and why I’m hoping to secure an internship in the big city. I refuse to get distracted by some (admittedly handsome) jock that I’m tasked with teaching. He’s uncoordinated, but eventually, I can tell that he’s actually trying, so I cut him some slack. There’s also the tiny detail that he admits he may not be 100% straight.
That’s fine by me. It’s not like a guy like that would go for someone with a messed up face like mine. Still, as the weeks go by, something shifts and we become closer. I can’t let myself become sidetracked in catching feelings for a boy who’s new to being queer. I just need to disregard the burning chemistry we have whenever we’re in the dance studio alone. It’ll be easy to ignore the way he makes my heart flutter when he talks to me, or how charming he is when he lets down his guard.
Well… maybe one kiss won’t hurt, right?

[ “The Moves We Make” is a low-angst, male/male romance, opposites-attract story involving hands-on movement lessons, road trips, drunken dance floors, soccer games, and discovering what love and sex with the RIGHT person can actually lead to, HEA guaranteed.
It is the second of the “Artists and Athletes” series but can be read as a standalone.]

I am on a roll with reading some amazing NA romances lately and the The Moves We Make slots right into that category.
I really loved getting to know Landon more. There was so much more to him than that loud mouth jock who's besties with Ravi. He surprised me in the best way with his kindness and vulnerability with Dane. I loved how he was so open to exploring his feelings. He didn't need a million hookups to experiment with his sexuality. Being with Dane felt good. It made him happy and that was plenty enough for Landon. One thing that made me happy was how Landon never went through the whole paranoid, people are gunna know drawn out stage. When people discovered his relationship with Dane there was no "big gay freak out". Landon wanted people to know Dane was his once his heart was all in. Though even Dane was surprised by Landon's boldness, I really loved how the author portrayed his coming out as no big deal with everyone else. Sometimes I get sick of seeing all the homophobia and judgement, though I know sadly that's reality. I think some of that was what had Dane holding himself back for much of their blossoming romance. Dane just wasn't used to being the center of some ones universe and it had him running scared.
This book was less angsty than book 1. It was heavy on the feels and romance which I really enjoyed. Dane and Landon just clicked in such a sweet way. A bunch of new side characters were introduced and I must say I'm hoping for a bunch of their stories in the future. I have a pretty solid inkling of who book 3 is about based on the title and the tiny hints in this one. It's definitely going to go to the top of my TBR pile once its release date is announced.

Rating: 5 Stars
The Moves We Make is currently available in e-book and paperback and can be read as part of your Kindle Unlimited Subscription
You can also join us in the MM Romance Reviewed Facebook Group tonight at 6:00 PM EDT for the Release Party and Author Takeover! 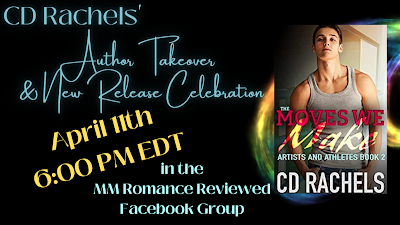 and if you're still not convinced, how about an exclusive excerpt: 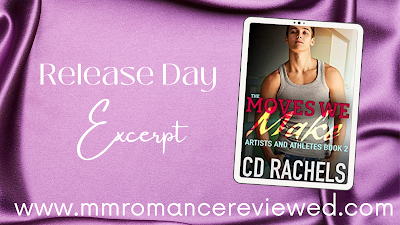