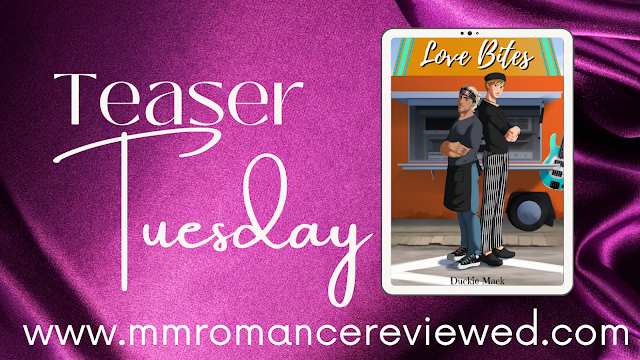 Duckie Mack's third book in the Love Bank romance trilogy, Love Bites, is releasing on Saturday, April 24th!  I've got a sneak peek below featuring the first interaction between Jonah and Van after Jonah's first day on his new food truck... 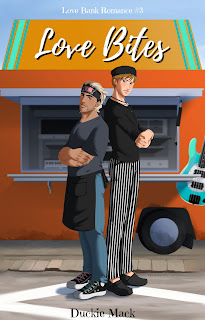 Jonah might have hit it big as a member of a rock band, but his dreams go beyond music. His heart belongs in the kitchen. A food truck seems like the perfect solution to let him do both.
Donovan "Van" has worked hard for his restaurant on wheels. He won’t let anything get in the way of his passion, not even a new guy crashing onto the food truck scene.
Jonah and Van might have gotten off to a rough start, but when Jonah needs help, Van is the one who shows up. Can these two competitors become companions?
Love Bites is a sweet story of pursuing dreams, discovery, and finding your way to love one bite at a time.
The Love Bank Romance series features sweet LGBTQ love stories with a little heat. 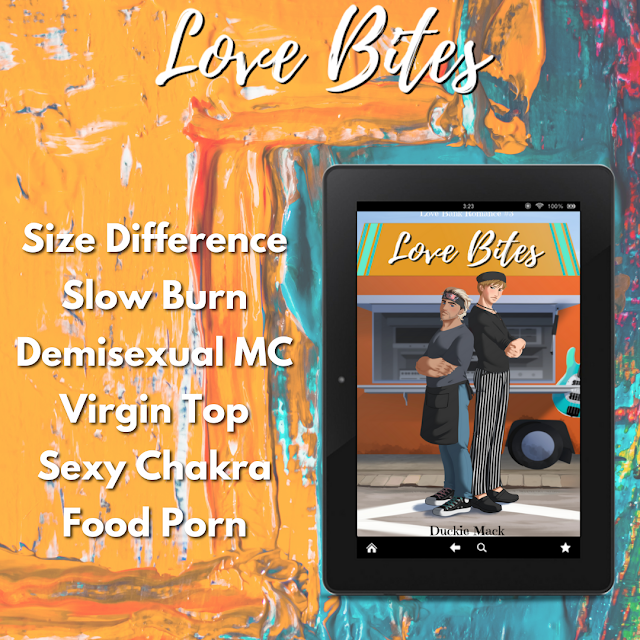 I thought of the other truck across the lot. It was small and black with a cartoon pig on it. I’d seen it around town. I should have gone over and introduced myself when I first pulled in this morning. But Ian and Bodhi had shown up and everything happened so fast after that. I hadn’t even had a chance to look over and see if they’d been busy too. Now that I had dismissed the remaining crowd, only a couple of people still wandered about. The ones that were actually there for the sale.

The manager had been all too thrilled with my appearance at their big event once he had been won over by Crow. I fixed him a grilled tilapia sandwich with mango salsa. He said he was a big fisherman and raved about the sandwich. I knew with the location, fish would be a good idea. It had been the first thing I’d sold out of. Robert was all about the free publicity my truck brought and I was glad to have had a solid spot to park for the day.

Now it was time to go meet the other truck owner. I had done a lot of research, but it would be good to make some friends in the biz, maybe get to glean from them. Experience trumped research. I hung up my hat and apron, leaving me in my black henley with rolled sleeves and pinstriped black chef pants. I’d grown accustomed to wearing chef pants during schooling, they were light and cool when you were running around the kitchen or standing in front of ovens and stoves. I swiped my hands down my shirt, straightening any wrinkles, and started walking across the lot.

There weren’t any customers lingering about as I went up to the window. A guy about my age had a black bandana with the logo that matched the side of his truck dead center on his forehead. He had bleach-blond hair held back by his bandana. When he saw me, his blue eyes narrowed and a scowl took hold.

Okay, he seems friendly. I tried to push that reaction aside and introduce myself. “Hi, I’m Jonah. I meant to come over earlier, but the day got away from me.”

“I know who you are.” His voice had a bite to it and he crossed his arms in front of his chest.

What the hell? What was this guy’s problem? Inhale positive, exhale negative. “Okay, well, I just wanted to introduce myself. I’m new to the scene and would love to get to know other food truckers. How long have you had your truck?”

“A little late for that, don’t ya think? So... thanks, but no thanks. Not interested.”

Cold. He was so cold, it might as well have been a slap across my cheek. Message received loud and clear. “Alright, well, I guess I’ll see you around then.”

He shooed me away, crossing his arms again. I could feel his gaze piercing into the back of me with an intensity that seemed completely unfounded. I didn’t know what happened, or what his deal was, but it didn’t sit right with me. I may not have liked being swarmed by people, but I also worked hard to leave a good impression on others and in putting out good energy. The energy coming off of that guy in waves was far from good.

I got in my truck and drove off, trying to leave the bad vibes behind me. They managed to hitch a ride like a ghost in the Haunted Mansion and followed me. I was still feeling it, still trying to figure it out when I got back to the storage lot where I parked BB. I cleaned and sanitized every nook and cranny of my rolling kitchen. I breathed in the familiar scent of bleach, hoping it would cleanse the distaste the other trucker left behind. Still, it lingered.

With BB set and ready for the next time, I drove home in my van; the same once used to cart our instruments around in. My parents were home which happened less and less now that they were both retired and traveling. Most of the time, I had the run of the house. Grabbing the bag of supplies and empty containers, it was almost 7 PM when I sludged toward the door. We worked plenty of long days on the road with the band, but I had always pulled double duty with classes and training too, so this was nothing new to me.

Love Bites is currently available to order in paperback form, but will release on Saturday in e-book form and will be available to read as part of your Kindle Unlimited Subscription.

You can be part of the Release Day celebrations by joining Duckie Mack's Ducklings Facebook Group and joining this amazing group of authors at the party: 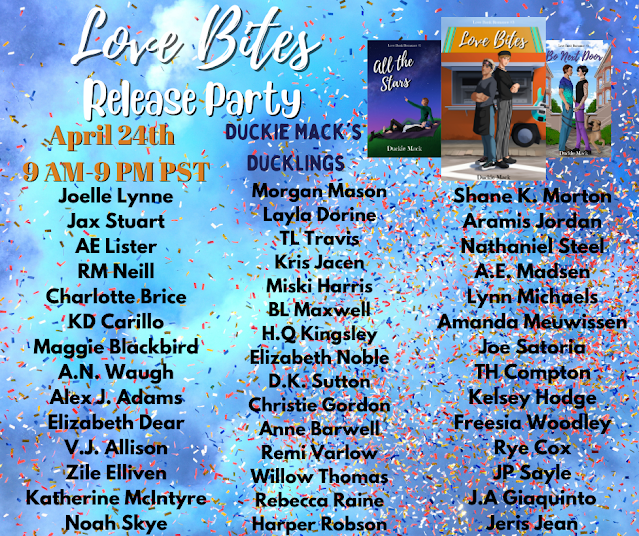