Snowed In With Benefits by Misha Horn 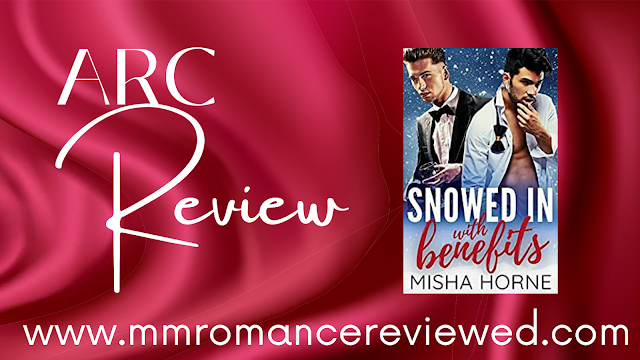 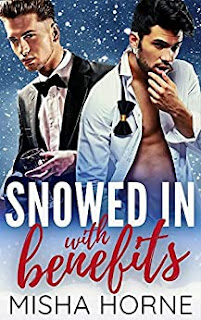 When a reclusive musician avoiding the spotlight and Hollywood's favorite train wreck get snowed in together, what could go wrong?
Austin Ash is famous for trashing things. Hotel rooms, relationships... his career.
After his latest public meltdown, he's desperate to reclaim the spotlight— and get it off his ex's embarrassing revenge album. Presenting at The Snowglobes and owning the legendary afterparty is the perfect plan... Until he parties a little too hard and wakes up trapped in the middle of nowhere with the one guy alive who's not charmed by his chaos.
Marco Palmer is music royalty. And he's about to renounce his title.
Music is his family's legacy and all he's ever known, but an award-winning role on a hit tv show changed everything. A secluded mountain cabin is the perfect place to make the most important decision of his life... Until he ends up with the world's most obnoxious, attention-seeking rock star throwing a tantrum in his guest room.
Stuck together at the worst possible time, tensions get high, tempers get hot, and the tabloids see something that just isn't there. Right?
Austin is definitely not interested in the old school know-it-all who torpedoed his splashy comeback. Even if Marco makes him feel safe for the first time in years and is tapping into some embarrassing secret desires.
Marco is definitely not interested in the jaded, burnt out rock star who trashed his quiet weekend. Even if Austin is sweeter and smarter than he acts, and is clearly in need of a firm hand and the kind of attention fame can't provide.
But the photo breaking the internet that's hot enough to melt all the snow outside?
That says different.
And that drunken kiss they're not talking about?
That says different too.
Snowed In With Benefits is a steamy, kinky, cozy, trapped together, opposites attract MM romance bursting with comfort food, attitude, spankings, and all the no plot, just naughty vibes goodness that Misha Horne books are known for. ;)

Snowed In With Benefits is my second Misha Horne book and it definitely will not be my last. Because I think I liked this one even better than the first one that I read - and I loved the first one that I read.
This book epitomizes slow burn. It does a beautiful job with enemies to lovers, forced proximity, and with character development. And then, as a cherry on top of a book that seems sculpted to my likes, it doesn't do insta-love. They get an HEA, because a book in this genre without an HEA would be a let down, but it feels earned and its not immediate. Nor is it even really until the epilogue. What we are handed is, instead, the beginnings.
So let's start with the most impressive part of this book: the characters.
Austin and Marco are both so amazing. Even at his most annoying, Austin was basically being curled up and put into my pocket, petted on the head, and called my baby. Misha does a wonderful job of balancing out the broken parts of him with the cocky parts of him. His desire to be seen at all times and to keep up with his press, keep up with his brand, made me love him even more because we got to see underneath that veneer to the parts of him that just wanted to be SEEN and not just looked at.
And Marco, he was the perfect balance to Austin. He was steady but had his own broken parts. He was conflicted over his career and the path that his life was taking. He helped Austin, because he's a genuinely good person, and even when he found himself regretting it at the beginning, he never treated Austin in any way other than kind - even when they were fighting.
And the fighting? There was a lot of it. Except as the book went on, the fights felt more like foreplay, laying down kindling to what inevitably sparked between them. It takes a long time for anything physical to happen, but when it did, it felt like a long exhale. And god, it was beautiful.
Despite being a Snowed In book, this book still managed to have some amazing side characters. Mainly Sienna and Austin's dad, but we got smaller roles with the hosts of Access, Austin's ex-boyfriend, Marco's parents, etc. And each of them, no matter how small the role, were vibrant as they came off the page. They held their part of the story and seemed incredibly real.
And well its Misha Horne, so there's no need to state that this book was hot as hell and the domestic discipline scenes left my kindle smoking a little. Once we got to that part of the narrative, you might have needed to call the fire department they were so hot. But they were also incredibly balanced with character development, even in the hottest scenes, and I loved that.
Snowed In With Benefits is a dual POV story of two men who don't know one another when they meet, get off on the wrong foot, but find something neither was searching for but both needed.
Red's Book Reads Review:
I enjoyed this book. I loved how calm and strong Marco was and how he managed to get to the route of the issues. Austin was your stereotypical Hollywood bad boy and it was great to be able to look further than that and see the person underneath the drama.
I adored how the two of them were together and how Marco was determined to keep Austin grounded and stop him causing himself more harm. I enjoyed this book and loved both Austin and Marco
Rating: 4 Stars
Heather's Review:
I can't believe that I let Snowed In With Benefits wait on my TBR... this steamy book nearly burnt a hole through my kindle with Marco's strong, patient presence while Austin tries to grapple with social media withdrawal and they both deal with reaching a crossroads in their careers and their lives...
I love a good forced proximity book, and this one has the added benefit of being near strangers - and of course one of them has had a crush on the other from afar for years!   Add in some sexy spankings and a few not so sexy ones and Snowed In With Benefits hit several of my favourite hot buttons for books in such a good way!
If you are ready to read a book that's strong on steam, with some mild kink and excellent back and forth banter, you'll want to add Snowed In With Benefits to your TBR
Rating: 5 Stars
Snowed In With Benefits is currently available as an e-book and can be read as part of your Kindle Unlimited Subscription
4 Stars 5 Stars ARC Forced Proximity Kink KU Opposites Attract Reds Book Reads Sarah C spanking steamy