Not a Boy (All American Boy) by Elle Keaton 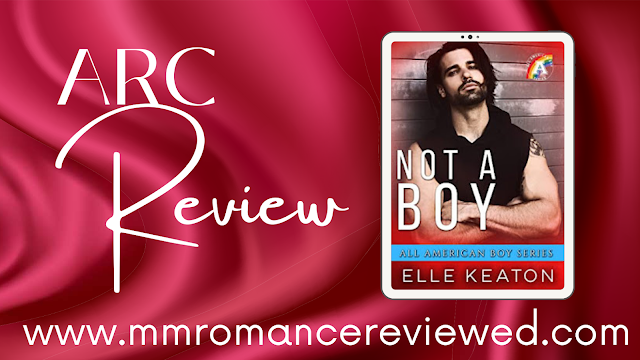 'A man, a seriously sexy, older-than-Ben man— like a grown man in his forties , not a witless frat boy—had stopped in front of Ben and was staring at him,...' Not a Boy Henry should have kept on walking by when he spotted the younger man sitting alone on the beach. He should never have stopped, never sat down, and certainly never kissed him. Because now Henry is experiencing feelings. And he doesn’t like it one bit.

Things happen for a reason, even random hook-ups. Ben was supposed to get off work early that night. It was no accident the sexy stranger stumbled on his beach hiding spot. The Kiss was destined, as well as what happened afterward. It wasn’t as if Ben believed in love at first sight, but this was damn close.

It’s a good thing Henry lives three-thousand miles away or he might do something stupid, like ask for Ben’s phone number.

Ben’s hometown boss begs him to return and he agrees, only regretting not being able to say goodbye to his snarky divorce lawyer. But all the wanting in the universe isn’t going to bring them together again, he doesn’t even know Henry’s last name. Besides, home is on the west coast, not Maine.

Sometimes the universe is a funny place.

Ben and Henry are likeable characters in this mm age gap kinda second chance novella. I enjoyed reading Not a Boy, the author did a great job in creating a well rounded story that drew me in from the start. Ben is a a 26 year old who surely does not want to be called 'boy'. And Henry is 42 year old divorce lawyer who is hesitant to trust love and relations will stay strong The meet at the beach and have an insta attraction/ lust filled hot night and unexpected meet again weeks later. I liked the creative take on the proposal gift .

I loved the chemistry between Ben and Henry and thought they were a super cute couple. As this is a shorter story, there was not a massive backstory and personally I would have loved more time to watch the relationship between them develop. That said, this is a cute story and I did really enjoy it

For a novella, Not a Boy packs a lot of story into it's pages... the instant attraction that is the hallmark of the All American Boy series is there right from the hook-up, through their separation and chance second meeting... Henry's pessimistic nature, being a divorce attorney, Ben's drive to be the best in his field, the absolute chemistry when they do get together... it's a beautiful story and it's well told within the novella. Do I wish for more, of course, they're great characters and more would always be welcome, but within the brief this was a well developed and well balanced story and one of my favourite reads in the All American Boys series so far!
Rating; 5 Stars
Not a Boy is currently available in e-book and paperback and can be read as part of your Kindle Unlimited Subscription
4 Stars 5 Stars Age Gap ARC Contemporary Found Family Heather KU Laora novella Opposites Attract Reds Book Reads Series small town Standalone sweet