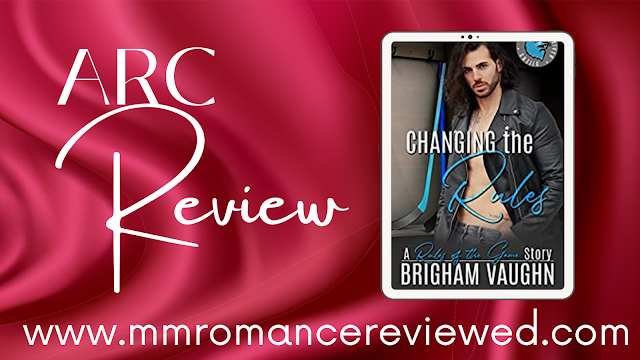 Brigham Vaughn has created another amazing hockey romance story... all by Changing the Rules 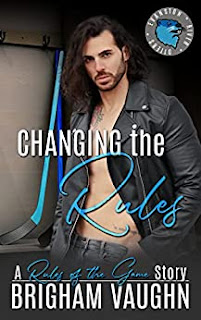 Rule #1: Don’t fall in love with the coach
Gabriel Theriault’s been skating on thin ice for the past two seasons with Toronto but his arrest following an off-ice fight is the final straw.
His only shot at redemption is to start over in Evanston and prove that he still has what it takes to be a pro player.
No more fights. No more drinking. No more random hookups.
Rule #2: The team always comes first
Years ago, Lance Tate’s on-ice injury ended his career and marriage.
His long road to recovery led to a job he loves as assistant coach with the Evanston Otters, and he wouldn’t dream of giving that up.
Until he meets Gabriel.
The French-Canadian is nineteen years younger, burdened by too much responsibility, and the most intriguing man Lance has ever met.
He’s also the absolute last man Lance should get involved with.
The draw between them is impossible to resist—even if it could cost them the game they love.
Their only chance at winning it all is to change the rules.
For trigger warnings, please use the 'look inside' feature.
Heather's Review -
Although Changing the Rules is book 1 in the Evanston Otters series, it's part of the larger hockey world that Brigham Vaughn is creating.  It can be read standalone, but I think you'd also enjoy Road Rules, which is a free prequel to the series and part of the YBBB promotion, as well as Bending the Rules, which takes place in the same universe but features the Toronto Fisher Cats team members.
I love these characters - caring, intuitive and both reaching for a fresh start in different ways.  Gabriel is such a lone wolf, taking on so much outside stress and trying to stay true to hockey and himself... Lance has been in a holding pattern for so long, recovering from his career-ending injury and rebuilding a new life for himself...  and the sparks!!!
Changing the Rules is a true second chance romance - both men need redemption and understanding in a world that often doesn't offer that - a world that values toxic masculinity and outdated homophobia.
Rating: 5 Stars
Changing the Rules is currently available in e-book and paperback and can be read as part of your Kindle Unlimited Subscription
5 Stars Age Gap Coming Out Heather hockey KU second chance Series Trigger Warning