Bending the Rules by Brigham Vaughn 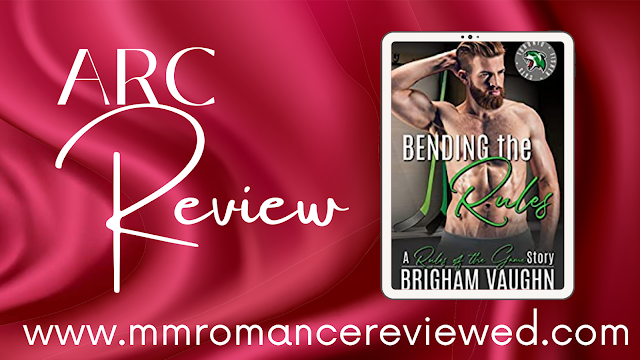 When you make your rules, you know at some point you'll need to bend them...
From the Bending the Rules blurb: 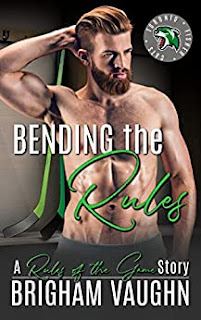 Rule #1: Rules are made to … bend
Noah Boucher loves his career as a hot-shot NHL goaltender—even after making league history as the first openly bi player. Last season’s catastrophic knee injury sidelined him and ended the Toronto Fisher Cats’ chance in the playoffs but now he’s determined to have one final season to win the Cup before he retires.
Hockey has always come first, but when fate offers him a second chance with his college crush, he’s desperate to not repeat the mistakes of his past.
Rule #2: Don’t mess with fate
When a chance meeting on a scenic train trip puts Noah back into Simon Lawrence’s life, he’s wary even though their connection is as strong as ever.
Noah walked away from him once to pursue his hockey dreams and the photographer and gallery owner has been burned by long-distance relationships in the past.
A future together will require braving not only the distance and time apart, but the media scrutiny that comes with dating a pro hockey player.
Rule #3: Trust your heart
When a catastrophe at the gallery hits just as the pressure of the playoffs is heating up, Noah will have to bend the rules and convince Simon that this time, love comes first.
---
Note:Bending the Rules was previously released as a free short story called Train to Snowhere. It has been expanded into a full-length novel and significant parts of the plot have changed.
Heather's Review:
I really like how the short story was expanded to really bring Noah and Simon's story together - I wish there had been a little more talking on the train, and it felt like the story disconnected in places which strengthened the disconnect while the two men were dealing with their long distance relationship.
The pacing was good and it was great getting to know more about Noah and Simon, their history and their relationship!   This book definitely brought the steam too!  I enjoyed the cameos from Noah's friends and also getting to know Leah, Simon's business partner and friend.  If you're looking for a second chance hockey romance than you're going to really enjoy Bending the Rules!
Rating: 4 Stars
Bending the Rules  is currently available in e-book and paperback and can be read as part of your Kindle Unlimited Subscription
Reds Book Reads Review:
I adored this story! I loved how this was a second chance but without the previous hurt and anger that you often get with it. Noah was just so open and determined to make his relationship work and I loved his dedication. Simon was so well written as well and I adored him and how he made sure to follow his own dreams as well as supporting Noah. I can’t wait for the rest of the series now!
The second part of the series is released 4/28 which I will also be reviewing.
Rating: 5 Stars
4 Stars 5 Stars ARC Heather hockey KU Reds Book Reads second chance sports steamy