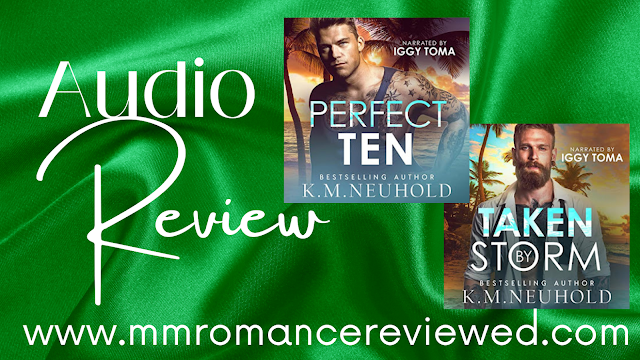 Laora says that, "Iggy Toma is brilliant for this series" about both Perfect Ten and Taken By Storm

A cheeky virgin, a surprisingly romantic bartender, one house, and six months of nothing but fun.... 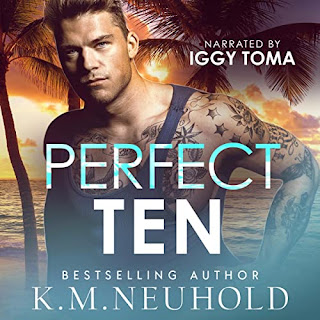 I came to Palm Island two seasons ago, confused about my life and desperate for a change. The island drew me in, but I’m still not sure why. Maybe it’s time I cut my losses and go back home, back to med school like I always planned. But when the breathtaking, flirtatious, tattooed bartender I’ve been crushing on for ages offers to let me room with him this off-season, there’s no way I’m leaving now. I can’t believe I’ve lived here this long without truly appreciating everything the island has to offer: the beauty of its untouched nature, how to catch a wave, the appeal of casual s…well, you know. But Ten seems determined to make sure I experience every last one, and then some. Will this be the last off-season I spend here, or could this thing between Ten and I be perfect? Welcome to Palm Island: Come for the sweaty nights and beach parties; stay for the endless swoon and heart-melting romance.

Chef Storm is moody, antisocial...and he just asked me to be his fake boyfriend. 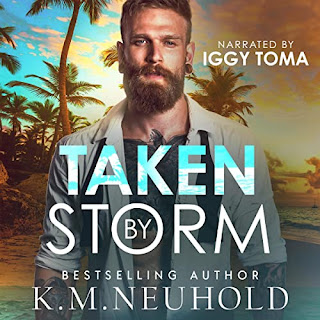 Most people on the island avoid the hot-tempered chef, but he doesn't scare me. Sure, he's prickly, but I've also caught him feeding a stray cat, so I know there's more to him than the sky-high barbed-wire fence he's built around himself. When Storm's ex-husband shows up unexpectedly during the off-season and refuses to go home, pretending to be Storm’s boyfriend is apparently my new job. Faking it with my grumpy boss should not be this much fun, especially since the last thing I need is to make a fool of myself by falling for anyone else on the island. Is there anything more exciting than being swept up in a storm? Maybe taming one... Taken by Storm is a grumpy/sunshine, sort of boss/employee, definitely fake-boyfriend (except how fake is it if they’re actually hooking up?) romance, the second book in the Off-Season series where the residents of gay resort island get up to way too much fun once all the tourists leave for the season. Each book can be listened to as a stand-alone, but trust me when I tell you that you won’t want to miss all of these shenanigans.
Laora's Reviews:

KM did it again, the start of a new series with likeable and loveable characters and Ten and Bambi are a sizzling combination of opposites in some ways and so compatible in others. They of course find their hea after some spicy scenes.

Iggy Toma does what he does best, colour in the story with his voice and supplies even more spice and enjoyment to this book.

I thoroughly enjoyed this to me high-heat fun read with a cast of quirky men on gay resort Palm/ Handjob Island where all the residents go by nicknames. I had to grin about the really laid back atmosphere and could picture the characters going about their life while relaxing and recharging. In this second book in the series Storm and Hennessey are boss and employee in a local restaurant that is now closed in the off season. When Storm his ex-husband comes to the island; Storm in an instant 'claims' Hennessey as his boyfriend who does not mind to get 'benefits' out of it. Of course they find they have real attraction and have to decide what they do about it. Find out and get to know some of the quirky characters a little bit better. And let me just add that I am looking forward to more stories about this colourful group of men. 4,5* for this story. I received an arc through the author and I am leaving my honest review. For the audiobook:

Iggy Toma does the book justice I felt completely relaxed and transported to the island lifestyle. 5*

Rating: 5 Stars Overall for both


Both Perfect Ten & Taken By Storm are currently available in Audiobook, e-book and paperback and can be read as part of your Kindle Unlimited Subscription