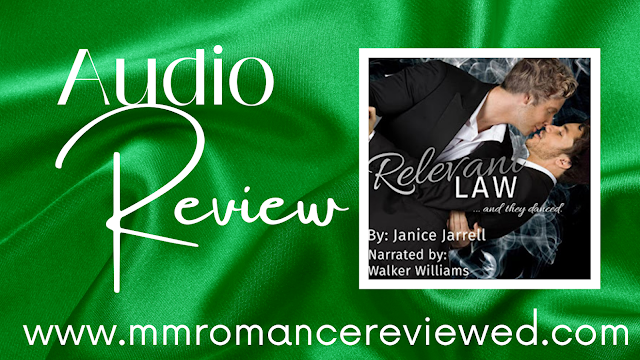 Relevant Law is written in an emotional and exciting way and I was captivated from the beginning. Brilliant narration
From the blurb:
They’d been through it all and emerged victorious. Now they stood on the very brink of a whole new life bursting with possibilities and renewed hope for the future. Colin will take the bar exam and begin his promising career as an assistant commonwealth attorney for the city of Charlottesville. Joshua receives his second PhD and adds forensic psychologist to his list of achievements. What could possibly go wrong?
And then:
Three students are abducted from the University of Virginia campus. All three are recovered alive but have been sexually assaulted and brutally beaten. From his new position as assistant commonwealth attorney, Colin partners with both campus and city police in a combined task force determined to solve these horrific crimes and put the perpetrator behind bars. But can they succeed before the "campus abductor" strikes again? The abusive and volatile husband of one of Joshua’s patients threatens his life. Suddenly Joshua is under siege as he is stalked both at work and at home by an unstable assailant.
Entangled in both these life-threatening situations, Colin struggles to protect both the university he loves and the man he adores. But...
“Oh God, Josh, my sweet love, if anything’s happened to you....” His voice trailed off, unable to voice the unthinkable.
“NO!" Joshua’s mind shrieked. "I can’t give up! I won’t give up! Colin will come! He’ll come!”
Warning: This novel discusses sensitive material that may be distressing to some listeners. Relevant Law explores themes of abduction, physical violence, and non-graphic sexual assault.
Lesetiger's Review:
Both the author and the narrator were new to me. I became curious because of the blurb, which sounded totally interesting to me.
Janice Jarrell has a great writing style and it didn't take long for me to find myself in Colin and Josh's world. I haven't read volume one and I didn't feel like I was missing any essential information from volume one while listening to "Relevant Law".
On the contrary, Colin and Josh's storyline intrigued me enough to want more of them and that's why I'll be listening to volume one.
I enjoyed the story immensely, I felt the deep love they have for each other with every word. The everyday life of the two was wonderfully described. Colin can't get out of his skin and is a bit overprotective at times, but I found that very endearing.
The author drew the characters deeply and the story was very emotional, but also exciting and totally entertaining.
This was also contributed to Walker Williams, who did an excellent job. He gave the characters different voices and I always knew who was speaking. He also did an absolutely great job of portraying the emotions - and there were a lot of them. Wow, I was blown away! He made a great story even better with his brilliant narration. And unfortunately, the 10 hours of audiobook were over way too quickly. I was captivated from the beginning and listened to the audiobook in just two days.
Highly recommended!
Overall: ⭐️⭐️⭐️⭐️⭐️
Performance: ⭐️⭐️⭐️⭐️⭐️ ️️
Story: ⭐️⭐️⭐️⭐️⭐️
Rating: 5 Stars
Relevant Law is currently available in e-book and Audiobook and can be read as part of your Kindle Unlimited Subscription