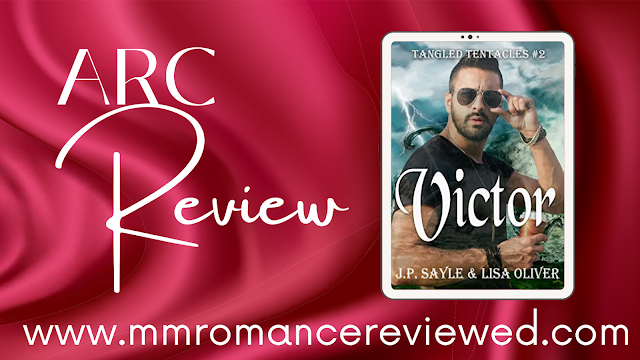 The Kraken Brothers return in Victor, picking up from where they left off in Alexi, Tangled Tentacles book One.
From the blurb:
Kidnapped and abused, Azim is losing hope. Can his fated mate save him body, mind, and soul? 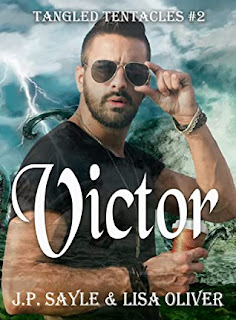 Azim Boaz is a hard-working vampire who takes care of his family until his freedom is taken from him. Drugged and kidnapped, Azim is sold to a sadist. His strength and spirit are whittled away by his cruel captor, but hope arrives in the form of a tentacled saviour.
Working as a consultant on a missing person case Victor Thalassa catches the scent of his mate—one of the missing paranormals he’s searching for. Despite the connection between them, Victor doesn’t want to make the silent vampire his until Azim is strong enough to make his own choices.
Azim’s kidnappers want him back. Will Victor and the rest of the Shadow Team be able to discover who is behind the kidnapping ring, and keep Azim safe?
Jacquie's Review:
Well this was utterly adorable. Victor showed the maturity of his age and waited on his partner the whole time before advancing their mating. Their communication was just lovely and showed true affection. The patience Victor had for Azim was perfect because it was natural to his character none of it was forced.
Some steam when they finally get there and though there is mpreg in this book but not from the main pairing. That bit did make me laugh when it was revealed.
The plot from the previous book continues and is mostly solved although I do get the feeling that there is more to the whole thing.
I really liked everything about it. My 0.5 off is because the little bait and switch at the end was a little jarring to me. I was expecting a hint at a different pairing to the situation I got.
Rating: 4.5 Stars
Jacqueleen the Reading Queen's Review:
Victor, Book 2 in the Tangled Tentacles series takes place pretty much right where book 1 left off in the epilogue. Kraken shifter Victor has whisked his injured and abused vampire mate Azim off to his families private island for some alone time to help him heal. Unfortunately, all the time spent on the island doesn't seem to be doing the trick of bringing Azim back to his healthy self. With Azim unable to speak, it takes them returning to the Thalassa compound back home for things to make real headway.
Victor was so sweet with Azim. He treated him like the treasure he was, but at some points it moved into coddling zone. I liked how Azim didn't want to be a victim. He was a survivor and he damn well didn't need to be babied. Azim was brave and a vampire. He has had own strengths and he made this known. Yes he loved how his mate took care of him, but he'd been independent for a long time so old habits I guess.
The case Alexi and Danik started working on in book 1 appears to be bigger than anyone knew. We do get some headway on it however and moves are being made. Speaking of Alexi and Danik, it seems Alexi neglected to tell his mate something very important about Kraken reproductive systems. The mpreg aspect is VERY descriptive in this one and to be honest it wasn't what I was expecting based on previous books I've read by Oliver. Let's just say there's no flash of light and a baby appears.
As with book 1 the epilogue gives us a sneak peek at the next couple and holy moly I think it's going to be a good one. I thought we were going to have to wait awhile for the only kraken omega to find his mate, but I thought wrong. Not only that, but from that hot little snippet it appears Todd has not one, but two alphas in store for him! I cannot wait to see what happens when the brothers find out!
Rating: 4 Stars
Heather's Review:
Tangled Tentacles has been an interesting series for me, since I don't typically read shifter romance, but it's JP Sayle and I couldn't say no... so now I'm invested in finding out the solution to the continuity mystery and also who the mates are... but to focus on Victor, this book was adorable!   I love how focused Victor is on making Azim happy - healing him, listening to his wants and needs and how attuned they become to each other.
Victor starts out so careful he actually overcompensates and it's kinda sweet to watch from the get go.  Once again JP Sayle and Lisa Oliver craft a believable romance even though its PNR and features a Kracken and a Vampire...  I also love how seamlessly they blend the Alexi and Danik's continuing story and hint towards the direction of books three and beyond.
You need to read this series in order, not for the individual couples, but for the ongoing case of the missing paranormal people....
Rating 5 Stars
Victor is currently available in e-book and paperback.
4.5 stars 4stars 5 Stars ARC Heather Jacqueleen Jacquie Kraken MPreg Paranormal Series Shifters vampire