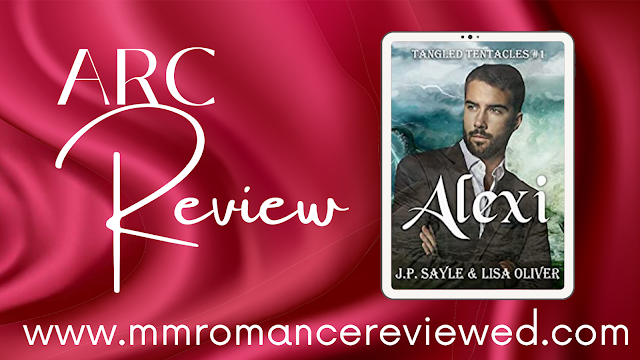 Alexi is a great series opener and it looks like the scene is set for the mystery to continue through the entire series...
From the blurb: 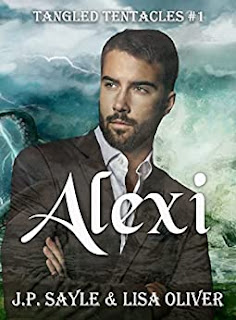 Book One: Paranormal Gay Romance / Two Alphas / Fated Mates / Brothers Security Team / Grumpy Detective / Kidnapping / High Steam / Lots of Tentacles.
The Fates are tricky and land Danik with a mate right when he least expects it. Can Alexi’s persuasive tentacles woo the jaded detective?
Detective Danik Kaloshnik, the only detective in Crampton, has no time for anything other than working hard to solve the growing list of missing paranormals. When his captain brings in a consultant to help, Danik does his best to avoid him. Only the universe has other ideas.
Now Danik has to deal with a very sexy fated mate, a murder, and a guy proclaiming to be a serial killer. What could possibly go wrong?
Alexi Thalassa has been treading the seas for centuries, dreaming of finding his fated one. When the Crampton Police Department reaches out seeking his firm’s help, Alexi’s kraken is all for it. One look at Detective Danik Kaloshnik, and Alexi is ready to give Danik his sea treasures. Then regulations Alexi’s firm have in place interfere and upset his mate, putting him in direct danger.
The race is on to figure out how all the pieces fit together so Alexi can help find the missing paranormals and keep his mate out of harm’s way.
Alexi #1 is a paranormal gay romance, with a large, grumpy bear frightened of water and a kraken who learns he’s not the only one who wants to be in charge. This is the first book in the Tangled Tentacles Series. Each book in this series will deal with a new couple, therefore while the HEA is guaranteed. The Epilogue for each book will lead into the next title.

This series opener gives us a great cast of characters with a grumpy bear shifter detective, a family of rare kraken shifters with zero boundaries, and other paranormals.

There was great chemistry between the leads and the steamy scenes are fire!

Personally, I wanted a little more resolution of the main plot, I have a few unanswered questions. This makes if definitely more of a HFN than HEA.

I liked the look into the next book, each of the brothers are getting their own, and wonder if the plot from this will continue into the next.

I typically haven't read a lot of shifter or ABO style books, but JP Sayle's holiday masterpiece had me chomping at the bit to see if Alexi could capture the same magic as Frenchie... and in some ways it did.

I love the secretive nature of Alexi, protecting his Kraken half and understanding just how rare he and his brothers are.. and I also loved the interplay with Danik, another alpha and a bear who feared water...and I truly wish this was more of a focus, because I think some of the romance got lost in the suspense plot and the ongoing issues of the disappearances.   The mating scenes were hot as hell, but I guess I wanted more communication... I know that this book is meant to set up the series and introduce each of the brothers, but I wanted more Alexi and Danik and their actual relationship.

I do look forward to getting glimpses of this pair as the other Tangled Tentacles books come out and I look forward to seeing what happens with each of Alexi's brothers as well.

I've long been a Lisa Oliver fan (especially her Cloverleah series) however, this will be the first book I've read by J.P. Sayle. I do have another book of Sayle's on my TBR, but I haven't decided if I'm ready for a book about a potato yet LOL. One day, perhaps.

In this series debut, this duo gave us an interesting world and cast of characters. I love the fact that there is an entire group, or should I say shaol, of kraken brothers we get to read about. And yes, I did google what the scientific term is for a group of Kraken and majority agrees on shaol since that is the term used for a group of squid. I'm sure my work's IT department will get a good chuckle about that particular computer search.

Both Alexi and Danik were alpha male types so we get some flip floppy goodness along with the tentacle fun. Speaking of tentacles, Alexi and his brothers have some pretty cool abilities that go along with their extra appendages and not all of them involve sexy times. On top of this being a romance, it also has a mystery to solve as Danik is a detective in the police department and Alexi is a consultant on the case. Seeing these two try and work out how their relationship was going to play into their daily jobs/lives was fun to read and not without some mild angst.

The book ends with Alexi and Danik solidly together, but the case they were working on is still ongoing. There is an epilogue which gives us a glimpse into the next books couple as it is from another brother's POV. It appears those two are going to have to jump some major hurdles for their own HEA, but I look forward to reading it and seeing how the brothers come together to help their own and his new mate.