The Mayor and the Mystery Man (Single Dads Club #2) by A.J Truman 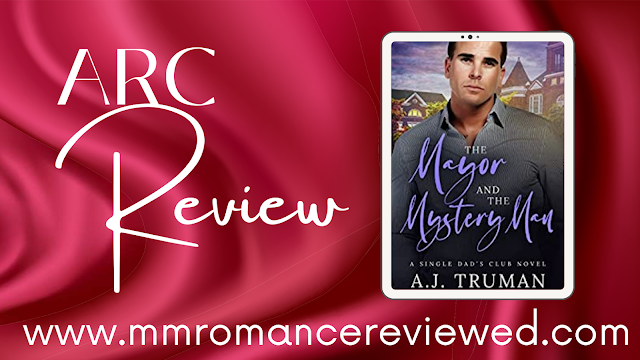 Lots of humor, heat, and love in this best friends to lovers fake boyfriend story. Single dads have never before been so much fun! The Mayor and the Mystery Man is an entertaining second outing of the single dads club. 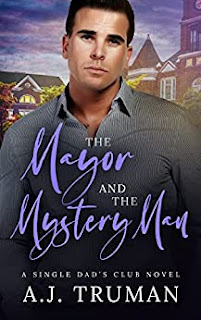 To win this election, I should be trying to kiss babies, not my best friend!My chances of reelection have gone from slam dunk to nose dive.

What happened? A former hookup sold me out to the press, complete with screenshots. In my defense, between being mayor and parenting twins (double the puberty!), I have zero room for relationships that go beyond one night.

My campaign manager says I need to change the narrative, aka get a boyfriend ASAP to make me seem more (ugh) likeable. The only person I trust with this ruse is my charming best friend Dusty.

Despite living 3,000 miles apart, thanks to endless text chains and 2 a.m. phone calls, we’ve been the constant in each other’s lives, navigating through single dad fails (me) and breakups with cruel ex-girlfriends (all him).

Each day we spend as fake boyfriends feels more real, which is odd because Dusty is straight.

And yet our playful banter is shifting from friendly to flirty.

And he doesn’t stop holding my hand when the crowds leave.

And was he always this attractive?

With reporters sniffing for the truth, exploring these feelings could mean the implosion of my political career and our friendship.

The Mayor and the Mystery Man is book 2 in the Single Dads Club series, but can be read as a standalone. Join Leo and Dusty as they stumble toward their happily ever after!

This was a lot of fun and it made me smile the whole way through. I loved the friendship and genuine affection between Leo and Dusty and how things naturally progressed. The practice kissing was funny and I loved Leo's reaction to it. Though there were no real surprises it was a highly enjoyable read. I love the town and supporting characters and I'm so looking forward to Mitch's book.

The Mayor and the Mystery Man is the second in a series, you can read it as a standalone but I'd highly recommend the first book as it's great.

Where The Falcon and Foe was a romantic comedy, this is a best friends to lovers, fake boyfriends with a mayoral election twist. I immediately liked both Dusty and Leo, we met Leo briefly in the first book but it was great to get to know him better here. It was so good to see him unwinding and opening up as the story went on. Honestly these two were such a perfect match, the chaos and wildness of Dusty perfectly complemented how buttoned-up Leo was at the start. I liked that Dusty didn't dwell too much on the fact he was attracted to a man after always thinking he liked women, and that he was the one to pursue Leo and realise his attraction. This was pretty hot too once they did get together, there was no stopping them and I loved it. I loved how open Dusty was to his feelings for Leo even if it did take them a while to admit to each other how they felt. Also I really liked the mayoral election plot driving the story, seeing the ups and downs of Leo's campaign - no spoilers but I was really hoping for the odious Rita to get her comeuppance, she really was a piece of work. Also, Leo's final campaign speech? 😍 🥰 ♥️ Great second entry to this series, I'm digging the slightly older MCs too, it's a nice change from young/college age guys and at this point, I'm here for the duration. Mitch next and I can't wait.


Not Guilty of Books Review:

I have a weakness for best friends for life to ‘you're the one for me’ lovers, especially when it’s been a long time coming. I will never get enough of it. These two, Leo and Dusty, do not disappoint.
Best friends from college, they’ve been through it all together over the past 20 years. Calling each other at night like schoolgirls, texting each other every day. So when Leo needs a fake boyfriend to help his re-election campaign Dusty is more than happy to leave his disastrous life behind and help him out. What you really need to know is that they fit perfectly. They have such a wonderful connection - playful and fun, but they can also call each other on their crap. They may also have a bit of a competitive streak which leads to all manner of fun.
And should we talk about their chemistry? Let’s just say that their first time together is fire!! But what I loved the most was that they never doubted each other. They always have full and complete faith in their friendship. The only people they were kidding with their fake relationship were themselves!
The Mayor and the Mystery Man is a really enjoyable read, with some wonderful characters and plenty of humor, heat, and love.
Rating: 4.5 Stars
Heather's Review:
I love a good fake romance between BFF's, especially when one of those bffs has been harbouring a crush for years on his straight best friend...
AJ Truman developed this story with a deft hand, from the initial crisis to the blossoming relationship, the whole book feels like a natural progression... it's a slow burn exploration of becoming more than best friends and I loved every second of the journey...
I love that the characters had inside jokes and intimate knowledge of each others wants and needs, but were skirting the line with practicing kissing...
This book was playful, fun and still had serious moments that drew me in and held my attention from start to finish.
Rating: 5 Stars
Miki J's Review:
".... Put your lightsaber in my infinity and beyond."
Very enjoyable story. Small town, friends to lovers, fake boyfriends, low angst, new awakenings. This book is a lot of fun – the mayor, Leo, is running for re-election but has hit a bit of a bump. So, he calls in his best friend to help him out, which is perfect timing because Dusty has hit a few snags as well. Love the banter between the characters – loved their friendship and then when that turned into something more, something deeper, it was beautiful. The other characters (from previous books) are part of this story so you do read who is with whom, possible spoiler, other than that you could read this one as a stand-alone. Thoroughly enjoyable book.
Rating: 5 Stars
The Mayor and the Mystery Man is currently available in e-book and paperback and can be read as part of your Kindle Unlimited Subscription
4 Stars 4.5 stars 5 Stars ARC Contemporary Fake Boyfriends Friends to Lovers gfy Heather Heather of NotGuiltyofBooks Jacquie KU Miki J Series Sheena