Tell Me Our Story by Anyta Sunday 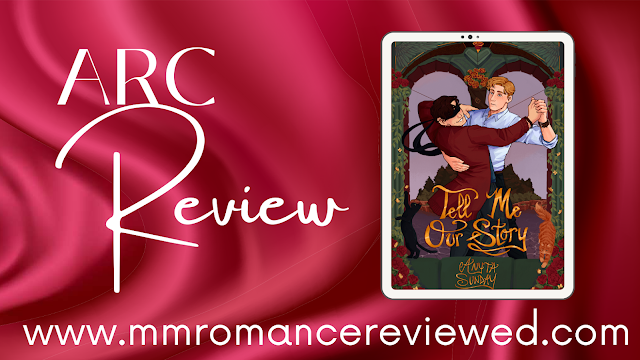 Jonathan and David didn’t get their chance the first time.  Can they get it right the second time around in Tell Me Our Story?
From the blurb: 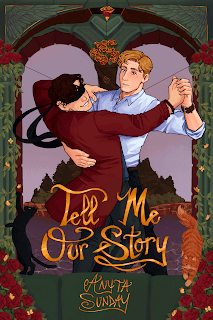 Icy, standoffish Jonathan Hart always turned towards that laugh. Full-throated, uninhibited, addictive.
Soft smiles encouraging him over swing bridges. Hearty chuckles dancing around a ballroom. Wobbly grins. Double-glances. Eyes that brightened the world. His world.
From the moment he met David O’Hara, Jonathan started forming a smile of his own.
And then O’Hara left.
One lingering look.
No last goodbye.
Seven years later, that laugh again.
Full-throated, uninhibited.
Addictive.
O’Hara. Still all fire and flame, still drawing Jonathan in.
And now he wants Jonathan paired with him in a seven-week social influencing challenge.
Now, he wants to finish melting his heart…
Jacquie's Review:
Beautiful and dreamlike, the writing wraps around you and draws you into Tell Me Our Story. I saw this like an animated movie - helped with the stunning cover, in my head. David and Jonathan danced around their feelings, slowly revealing more and more as time and the challenges went on.
Light on details about things like Jacquie (yes that was strange for me, I've never seen my name in a book spelled correctly), but it was just so pretty and heartfelt that it almost didn't matter.
As Anyta Sunday books go, it is an epic slow burn but worth the payoff.
I loved David and Jonathan together so much, the way that they balanced each other, the care and attention they lavished on each other. I'd absolutely read Tell Me Our Story again
Rating: 4.5 Stars
Heather of NotGuiltyofBooks Review:
A slow burn, best friends to lover romance…
Tell Me Our Story truly lives up to its description.  It takes a long time to sort out their history, to understand their stories.  It’s a long reveal mixed in with Greek mythology and ballroom dancing (oddly not as weird as it sounds!).  As Jonathan and David reconnect, their story unfolds, past and present simultaneously.  Along with a host of wonderfully loving and quirky friends and family.  You won't be disappointed by the ending.
Anyta’s writing is a style all its own, very languid and poetic, which won't be everyone’s taste, but it fits the story.  This was my first book by her and in the end it was worth it, but you do have to work for it. I'll be back for more.
"
Sheena's Review:
"***EDIT*** Since I wrote this, the author has added a prologue to the story, this allays a lot of the slow start and really sets the scene for the two MCs much better. ***
Not going to lie, I really struggled with the start of Tell Me Our Story, I'm all for a slow burn but at the start of this I just wasn't feeling it. I didn't feel the connection with either Jonathan or O'Hara, I didn't feel the chemistry between them either and it just felt to me as if it started in the middle of the story and worked back from that.
I did stick with it though, slow as the start was because once the backstory was finally revealed, it was good. I did start to feel the connection with O'Hara and Jonathan, and I liked the idea that they were working together for the prize, and then O'Hara's driving reason for winning that prize. It was such a slow burn though, and it would have benefited from us knowing a bit about both going in from the start, I think.
I did really like both, I'm a bit of a sucker for grumpy/sunshine although it's not really fair to call Jonathan grumpy - he's more buttoned-up than grumpy and it was lovely to see him loosening up a little as the relationship and story with O'Hara (David) progressed. I LOVED the ballroom dancing scene, that was so well done.
Overall I really enjoyed Tell Me Our Story, despite the slow start as I liked the story idea, the side characters and there was a really lovely HEA too.
Rating: 4 Stars
Sarah C's Review:
Anyta Sunday has done it again - creating a beautiful story that left me aching for more from these beautiful characters but satisfied with what I was given.

Tell Me Our Story is a standalone about two social media influencers, Jonathan and O'Hara (David). They have a history, two best friends who grew up in the same town with the whispers of something more between them. Then O'Hara left. The two men fell out of contact and a rift grew between them. The story begins again at their reconnection, and you can practically feel the pain radiating off of both of them, though O'Hara is better at hiding it. I almost wish that Anyta wrote in the dual person POV, just so we could've seen what O'Hara was feeling during that reunion. Even without the dual POV though, you're able to get a decent glimpse and explanation over the course of the story.

After the ICon event, the two men then team up together for the social challenge, which requires them to fill certain prompts - all dealing with Love. Its a rush to see what they're creating for each event and also to see how their friendship begins to bloom again and develop into something more.

Like all Anyta Sunday books, this book has just a touch of humor and more heart than the cardiovascular ward of a hospital. The characters are incredibly lovable and the side characters - particularly Jonathan's sibling Savvy and ex-girlfriend, Jacquie, all feel incredibly real. They add a lot to the story. Watching Jonathan process everything that happened with O'Hara through his siblings budding relationship with another teenager, Nate, is beautiful and adds a great parallel. I found myself rooting for Savvy and Nate as much as I was rooting for Jonathan and O'Hara.

If you're looking for a book with low angst that warms your heart, then look no further than Tell Me Our Story. It is a single POV, low angst, and low steam novel with a delicious slow burn that will get you in your feelings.
Rating: 5 Stars

Tell Me Our Story is currently available as an e-book and can be read as part of your Kindle Unlimited Subscription.  You can read an excerpt and check out the Release Blitz giveaway by clicking on the graphic below: 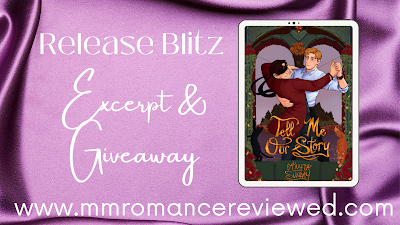