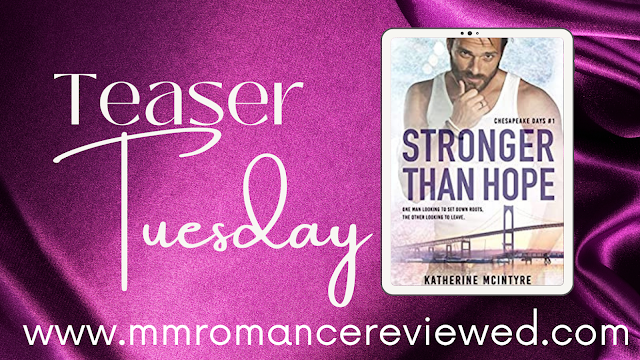 Stronger Than Hope, the next delicious read from Katherine McIntyre arrives on Friday!   We'll be celebrating with a review on Friday and an Author Takeover in the Facebook group on Saturday at 9am EST, but for today we have a fabulous excerpt:

Before I get ahead of myself, here's the blurb: 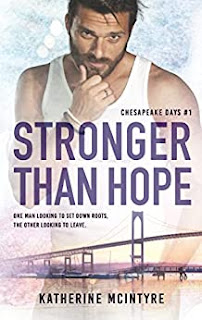 One man looking to set down roots, the other looking to leave...
Fresh out of a relationship, Nate's searching for a change-what better way is there than renovating his uncle's old coffee shop in Chesapeake City? He has a new job, in a new town, and a new lease. And when he almost runs over his hot neighbor, Linc, who happens to be his contractor? Well, based on the explosive attraction between them, maybe he'll find something new there too.
Linc's been treading water ever since his wife passed away in childbirth, focusing all of his energy on raising his son, Beckett. The obvious solution? He needs to get the hell out of Chesapeake City. But when Nate charmingly fumbles his way into Linc's life, he finds his defenses lowering for the first time in years. One date leads to another, and hell, this man makes him feel in ways he'd forgotten.
Even though Nate just finished piecing his heart back together, he falls fast. Yet Linc's made it clear he's a bad bet. The man hasn't clicked with anyone since his wife, and if Nate ends up being "not enough" again, that won't shatter just his heart-the fragile home he's trying to build in this town will crumble too.

Linc stood, and Nate took that as his cue, rising beside him. A second later, Linc slid in front of him and glanced back. The corner of his mouth quirked in the faintest grin.

“Hop on,” he said, gesturing to his back. “I’ve got something to prove at this point.”

Nate’s mouth dried with want, even as his nerves took over. “No way, I’m not going to be responsible for wrecking your back. I need you to do the remodel on my business, remember?”

“Do it, do it,” Nico chanted behind him, like the devil incarnate.

Linc leaned forward a bit, knees bent at the ready. Goddamn, the man looked delicious, his defined arms as biteable as ever. Nate glanced over to Sarah, who offered a thumbs-up with a cheeky grin, and he rolled his eyes at her.

“Fine,” he murmured and placed his hands on Linc’s shoulders. Within seconds, the man grabbed his legs and hoisted him up. The strong grip around his thighs felt even better than he’d fantasized. Hoots and hollers sounded from the bar as he leaned in, his chest pressed against Linc’s back. The two drinks had nothing to do with the way his mind dizzied right now.

Linc began to carry him out, moving forward with steady strength he should’ve expected, given the man’s livelihood. Nate settled against him, his body lined flush against Linc’s, thighs wrapped around his hips. He dug his fingers in a little tighter as Linc hoofed down the stairs with him on his back. The bumpy way his crotch brushed against Linc’s back had his cock growing hard, something he’d be more mortified about if he didn’t have the pleasant buzz of alcohol numbing him. Nate let out a helpless laugh at the ridiculousness. He’d never expected the spontaneous move from Linc, but damn was it hot.

“You can let me down,” Nate protested. “I weigh way too much to get hoisted around.”

“Nonsense,” Linc responded. “You’re no competition for the shit I normally haul at work.” He headed for the door, a few folks looking their way. Nate flushed. Next, talk about them would be circulating in the gossip mill of this town, and chances were, Linc would go racing the other way. Heat emanated from the gorgeous man carrying him, and Nate drank in the earthy scent of him, all sandalwood and musk.

Linc pushed his way out the front door and out into the brisk spring night. He glanced back. “Think you can manage to hoof it the rest of the way?”

“I was fine to walk out of Port of Call on my own in the first place,” Nate mumbled, sliding to the ground. His feet rested on the concrete, but his legs might as well have been jelly after all that close contact. The guy had been on his mind from the second he’d arrived in town.

“True, but I had a point to prove,” Linc said, raising his hands behind his head. He strode a couple of paces faster while Nate found his footing. He was okay with the space—not like he wanted Linc to see just how flustered he made him. Overhead, the silver moon looked almost full in the sky, glowing with pearly promise. The stars studded the glorious expanse, more visible out here than in Boston, which was too filled with neon lights.

“It was either me, or Jer would’ve when his shift ended.” Linc glanced back. “Unless that was something you wanted?”

The edge to his voice had Nate curious. Was he imagining all the heated glances, the way Linc glued himself to his side all night and literally swept him off his feet?

If he’d misread him, he was going to feel like a complete moron, and he’d already made an idiot out of himself around this guy a thousand times over.

Nate shook his head. “Jeremy’s hot, don’t get me wrong, but he seems like he’s looking for a hookup. That’s not my scene.”

Linc’s lips quirked, but Nate, for the life of him, couldn’t tell if that was in relief. Still, he couldn’t help but hope.

“And what is your scene, Nate McAllister?” Linc asked, his voice a deep rumble that would feel like sin against his skin. He needed to get his mind out of the gutter when it came to Linc, even if the man continued to feed his fantasies every time they hung out. Their houses stood out at the end of the street, a short walk away, though Nate wished their time together could stretch a little longer.

He chewed on his lip, unsure if he wanted to dive so deep. The alcohol decided for him, moving his lips before he gave permission. “I want something permanent, something real. Don’t get me wrong, I’ve had a few random flings, but I’ve been looking for someone who makes me see the future. Who can quiet my mind and tether me to the ground, because I tend to run away with myself otherwise.”

His chest ached. He’d known for the last year or two with Sam that their relationship wasn’t the pinnacle in his mind. Yet, he couldn’t help but hope it would turn into something better, that all his time wouldn’t be wasted.

Instead, he’d come home one evening to see apartment listings up on Sam’s computer… only to discover the man had already found one and planned to move. Once he broke up with Nate, at least.

His palm went to his chest, and he absentmindedly rubbed it, as if he could erase all the pain. The concrete beneath held cracks he avoided as he kept his gaze down.

A warm, large hand clapped on his shoulder, stopping him midstride.

Nate glanced up to see Linc beside him, those dark eyes serious. He swallowed, hard.

“There’s nothing embarrassing about that,” Linc murmured, his voice a bit rough. “It’s a beautiful dream, Nate.”

Those words socked him in the chest. Voicing them aloud, having someone acknowledge them—damn, he didn’t know how much he’d needed that. Nate shook his head. “You know, for as distant as you try to seem, you’re a softie, Linc.”

Linc’s lips slid into a half smile, and his dark eyes twinkled under the pale light from the streetlamps. “Don’t tell anyone.”

Stronger Than Hope is already available in paperback form and the e-book will be delivered on Friday!
Join us Saturday in the Facebook group for your chance to win a copy and more!