Stronger Than Hope by Katherine McIntyre 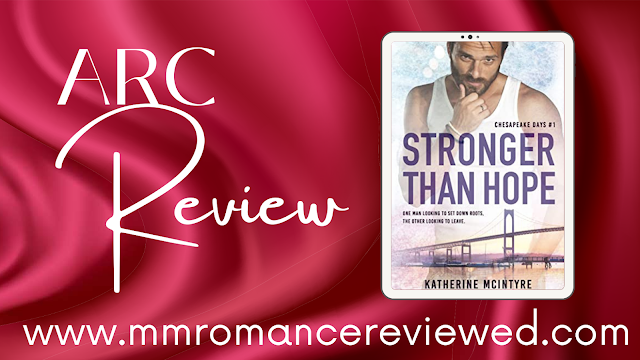 Stronger than Hope is a sweet and wonderful beginning of the Chesaapeake City series. 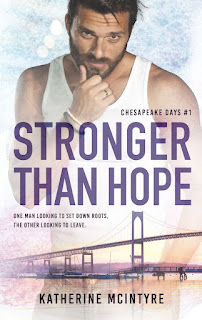 One man looking to set down roots, the other looking to leave…
Fresh out of a relationship, Nate’s searching for a change—what better way is there than renovating his uncle’s old coffee shop in Chesapeake City? He has a new job, in a new town, and a new lease. And when he almost runs over his hot neighbor, Linc, who happens to be his contractor? Well, based on the explosive attraction between them, maybe he’ll find something new there too.
Linc’s been treading water ever since his wife passed away in childbirth, focusing all of his energy on raising his son, Beckett. The obvious solution? He needs to get the hell out of Chesapeake City. But when Nate charmingly fumbles his way into Linc’s life, he finds his defenses lowering for the first time in years. One date leads to another, and hell, this man makes him feel in ways he’d forgotten.
Even though Nate just finished piecing his heart back together, he falls fast. Yet Linc’s made it clear he’s a bad bet. The man hasn’t clicked with anyone since his wife, and if Nate ends up being "not enough" again, that won’t shatter just his heart—the fragile home he’s trying to build in this town will crumble too.
KjnRose's Review:

This is a new series by an author I love to read and I was excited to get this one. I loved the small town feel and the wonderful characters. It was well written with a great storyline. It was a lust at first sight that turned into a relationship, there is some angst and a breakup, but in the end they find their HEA. I loved it and can't wait to see what happen next in the series.


Heather's Review:
I really loved how sweet and comforting Stronger than Hope was. Between Nate's clumsiness and Linc's devotion to his son, you immediately fall in love with both characters and root for their HEA from their first meeting. Chesapeake City is the setting for this new series and I can't wait to read future installments and see how Nate and Linc's worlds integrate into future stories.

I found Stronger Than Hope a sweet and relaxing read, with just enough angst and a decent helping of steam for the storyline.

"A loud curse snapped his attention front and center. Nate slammed on the brakes. The blinding light cleared in time to reveal the guy he’d been two seconds from flattening."

Nate has moved to Chesapeake Town, after his relationship is over and inherits his uncle's business. He is generaly sweet. The first he literally bumps into is Linc. Linc is a widower who is finding it hard to find his way after loosing his wife several years ago. His greatest joy and reason for living is Beckett his son. This was a romance with a little bit of angst and in the end a hea after both men realized they are it for each other and Beckett.
I enjoyed this book it is well written and I had to keep reading through to the final. I recommend it if you like a sweet read with a slowburn heat and likeable side characters. I am looking forward to the next books in the series.
Rating: 5 Stars