Release Blitz and Excerpt: A Conspiracy of Ghosts by Tricia Owens 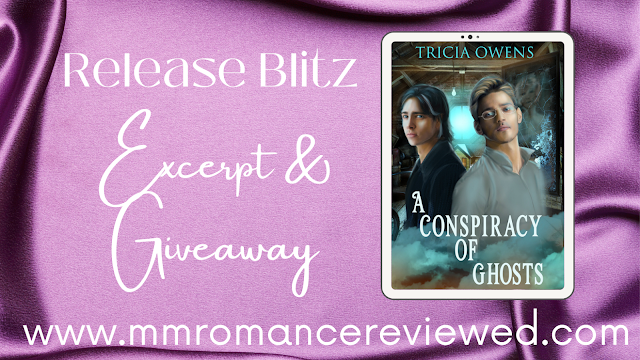 Book Title:  A Conspiracy of Ghosts

As young men struggling to deal with their paranormal abilities, Michael and Dane found relief when they found each other. Michael could hear the dead. Dane could feel them. Together, they seemed the perfect pair. But chasing ghosts is a demanding lifestyle, and despite their attraction to each other, their tumultuous experiences drove them apart.

Eight years later, their paths cross again. They’ve been pitted against each other in a competition to exorcise a ghost from a B&B. Now that they’re changed men, Dane is determined to win Michael back. But Michael is distracted by Jericho, a ghost with the face of an angel but with a core of cruelty. A ghost who knows their deepest, darkest secrets.

His recent encounter with Dane swam across the surface of his thoughts, disturbing the meniscus. I'm willing to forgive if you are. Michael had been too shocked by the statement to react to it except defensively, but he considered it now more thoughtfully. Dane wanted them to try to work it out. Dane regretted their break-up. Michael knew him too well to believe that forgiveness was the only motivation behind the come-on. Dane wanted to prove to himself that he could pull from Michael what no one else had been able to: his undivided attention.

Good for him, but Michael wasn't sure what he wanted. Seeing Dane again, this new version of him, had turned his world on its ear. It was tempting to dismiss the wild, uncontrollable man Dane had once been. With this change and with his declaration, Dane demanded to be taken seriously as a romantic partner.

As soon as Michael allowed himself to consider the possibility, he knew he was in trouble.

Slowly, he lay back on the bed and let his hands flop naturally. One landed on the mattress beside his hip. The other fell on his upper thigh, near his slowly filling cock. After a pause and an even briefer debate with himself, he lightly cupped his palm over the growing mound in his jeans.

He hadn't taken many lovers after Dane. His longest relationship had been four months with a parapsychology student who'd begged to become Michael’s assistant despite him not needing one. But the student, Charles, had been relentless and Michael, flattered and lonely, had given in, allowing the younger man to accompany him on a handful of cases. The inevitable had occurred. Just as with Dane and all the others, Charles grew frustrated with what Michael couldn't give him.

"I feel like I'm dating someone with mental problems," Charles had stated bluntly at the end. "You should look into medication."

Embarrassed and humiliated, Michael had done so. But the doctor confirmed what he already knew. ADHD wasn't his problem. Ghosts were. They refused to be silent.

"And that hasn't changed even if Dane has," he murmured aloud to the empty room.

His clairaudience gift was stronger than ever and his interest in paranormal investigation was as intense as it had ever been. He didn't see how he and Dane could work it out no matter how badly they wanted to. But for the sake of the moment, for the sake of pretending at being normal, he fantasized about them managing it.

Intimacy between them had never been planned or even anticipated. Michael carried the blame for that. Though he’d always found Dane attractive, he’d usually been too preoccupied to act upon that attraction, leaving it up to Dane to initiate anything.

“Do you really not know?” Dane had asked the first time, after he’d lost patience and pushed Michael against a door to kiss him deeply. “Why do you look so surprised?”

“Because I—” Michael hadn’t known how to explain that his world was multi-layered and he sometimes got caught up in the wrong one. That is, the one without the living. He’d known even that early into their relationship that Dane wouldn’t react well to such an admission. “I wasn’t sure how you felt about me.”

“I’ve been chasing you,” Dane had murmured against his lips before swiping them with his tongue. “How could you have not known?”

Easily, but Michael said only, “I know now.”

Tricia Owens has been writing m/m fiction since 2000, after stumbling onto the term ‘slash’ and thinking it referred to horror stories. She is the author of the Sin City, A Pirate’s Life for Me, and Juxtapose City series, among several others. She lives in Las Vegas. 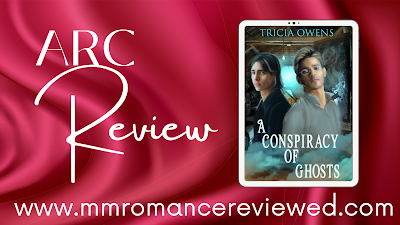