A Conspiracy of Ghosts by Tricia Owens 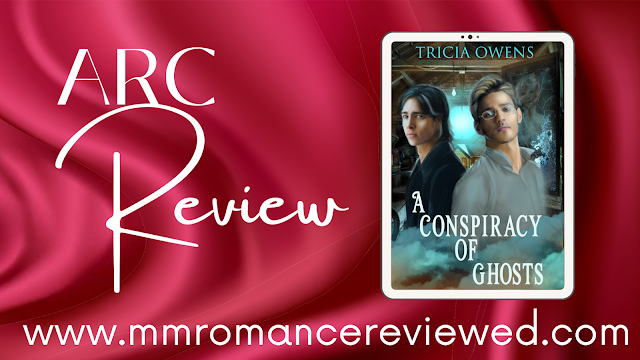 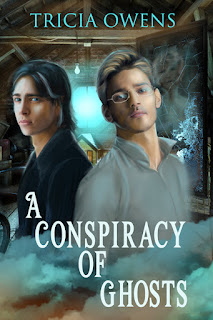 As young men struggling to deal with their paranormal abilities, Michael and Dane found relief when they found each other. Michael could hear the dead. Dane could feel them. Together, they seemed the perfect pair. But chasing ghosts is a demanding lifestyle, and despite their attraction to each other, their tumultuous experiences drove them apart.

Eight years later, their paths cross again. They’ve been pitted against each other in a competition to exorcise a ghost from a B&B. Now that they’re changed men, Dane is determined to win Michael back. But Michael is distracted by Jericho, a ghost with the face of an angel but with a core of cruelty. A ghost who knows their deepest, darkest secrets.

A Conspiracy of Ghosts is a difficult one to rate as it almost feels like 2 stories in one, both enjoyable but perhaps not given the full focus they deserved, which does impact the overall thing. Through glimpses and snatches of information, we are given the history of both the Inn and Dane and Michael's ill-fated relationship. So we get a general feel but often I found it frustrating that there weren’t more details. Although the investigators know the Inn owner is keeping stuff from them (and lured them there on false pretenses) they don't follow that up. Their investigation is spotty and leads them in circles. Despite the niggles, I did really enjoy it. I adored Michael. Dane I understood and from what we are told, both have matured and grown. If there are more books in this series I'd be interested in reading them
Rating: 4 Stars
A Conspiracy of Ghosts is currently available as an e-book and can be read as part of your Kindle Unlimited Subscription
Check out the release blitz post for a selected excerpt from the book by clicking on the graphic below: 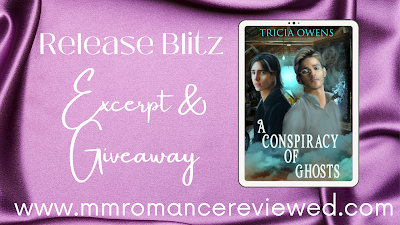