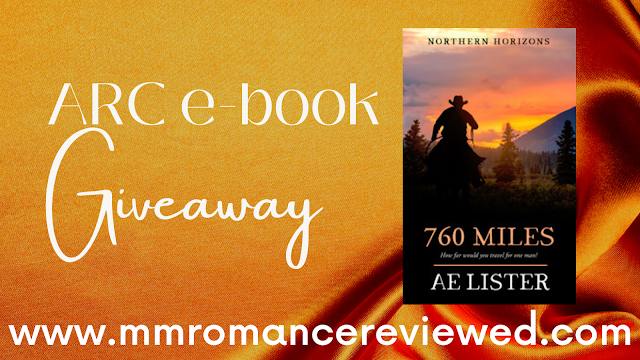 760 Miles is burning a hole in my ARC TBR pile, but since it doesn't release for a few more weeks, I have to be patient... but today, you don't - AE Lister is offering a tantalizing glimpse into Jimmy and Oscar's world and a chance to be one of the first to read this amazing new book:
From the blurb: 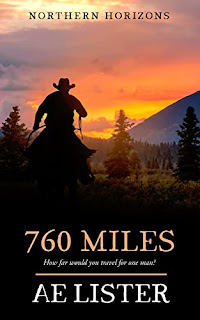 How far would you travel for one man?
The very last thing Jimmy Downing needed was a skinny traveling partner who acted half his age with a chip on his shoulder and no idea how the real world worked, because Jimmy had a lot of experience with the world and he wanted no part of it anymore.
He was trying his best to be an honorable man after two decades of being outside the law. He’d stolen things. He’d killed people in the name of survival. He’d helped other men do horrible things. But now he was keeping his head down and trying to live under the radar. T’wasn’t his fault that Oscar needed someone to show him right from wrong, give him something to eat on the regular and try to keep him out of trouble, so he didn’t end up making a mess of his life the way Jimmy had. Maybe that was what being a good man was all about.
Except the things Jimmy wanted from this twenty-one-year-old man were far from respectable, and he couldn’t stop thinking about them, especially when Oscar Yates of the big brown eyes, cackle of a laugh and insatiable appetite for anything grilled over an open fire insisted on pushing all his buttons.
How was Jimmy going to last the 760 miles to Port Essington without giving in to those needs Oscar called to with the hint of a smile and a smart-assed curse? Because if Jimmy did give in, it would mean both of them living outside the law and never having the chance at a decent life again.

NOTE: Jimmy (34) and Oscar (21) have just spent some time in a hotel in Dawson City where Jimmy found Oscar starving on the streets after he dropped off the supplies he was being paid to deliver. He got him a bath and found himself seduced the next morning. Jimmy decides to take Oscar to Whitehorse with him because he knows if he leaves him behind he’ll probably fall back into the state he was in, and Jimmy likes him. Like, really likes him.

“Thought you was stayin’ another night,” the proprietress said, taking my bills.

“Somethin’s come up, and I need to git. I’m sure you can find someone to take the room.”

“Thanks for the clothes you got for me. They fit my cousin real well, and he’s grateful for ’em.”

She eyed Oscar, who stood outside the door watching the foot traffic, then nodded with a blank expression. “Seems a lot better today. Cleaner and more talkative. You sure he’s your cousin?”

I willed my voice to stay steady as the heat lit my cheeks. “That’s what I said, ain’t it?”

“You did. Seems like I get a lot of rough men bringin’ their young cousins through here. Enough to make me wonder about some things.”

She stared at me silently, as if trying to send a message with her eyes. I knew what t’was, and I was not having it.

“Things I don’t wanna talk about…or think about,” she said, between clenched teeth.

I nodded curtly. “Then you’d best keep your mouth shut and your nose out of other people’s business.”

“Hmph,” she grunted. “I don’t care what folks do, as long as it don’t hurt nobody. I ain’t the minister.”

I turned and walked out onto the porch, grabbing Oscar by the elbow. “C’mon. Let’s get out of here.”

I must have pulled him pretty rough because he stepped back and glared at me. Fella had a flashpoint temper, that was for sure.

“What the hell’s wrong with you? I ain’t your dog, y’know, what just goes along with you when you whistle.”

For some reason, this comment made me want to laugh.

I raised my eyebrows. “You ain’t?” I couldn’t help smiling all of a sudden because he was too amusing for words, honestly.

“I— Now, you look here, Jimmy. I might—” He gazed around us as we walked to where the horses stood, hitched and ready, at the fence, to make sure no one could hear. “I might be willin’ to be your good boy, but I ain’t gonna crawl around like a dog for you. Never mind you want it.”

My dick ached all of a sudden at the look in his eyes, and the only thing I could think to say was, “We’ll see,” which about made him choke on his tongue.

At least it shut him up. Then he opened his mouth wide and cackled a laugh the whole town could have heard.

“Goddamn it. For someone so regular, you sure gotta sense for the more unusual side of things.”

“Hold on. I need to meet your horses.”

Horses were so regular and ordinary that I was surprised he wanted to meet them. But I followed him to the fence and told him about them.

“This here’s Dixie,” I said, scratching the mare on the nose like she enjoyed. She knickered to me, and I was glad to see both horses looking rested and ready to go.

“Hi, Dixie,” Oscar said, reaching a tentative hand out. I took it gently and placed in on Dixie’s black mane. She was brown everywhere except for her trimmings, which were black, and the white strip down her face. She was sturdy and reliable, most of all.

Oscar flashed me a grin and stroked Dixie’s mane then her neck. “She’s real nice. So soft.”

I nodded. “She’s a good horse. This gray gelding here is Sprite. He’s good too, e’en though he’s younger and a bit more flighty. She keeps him steady, though.”

He reached a hand out to Sprite, and the horse sniffed it, then pushed his muzzle against Oscar’s fingers, looking for treats.

“He wants a sugar cube or an apple.”

“I ain’t got those,” Oscar said. “I only got some skritches to give you, Sprite.” He ran his fingers o’er Sprite’s cheeks and down to his chin and scratched him lightly. When he turned to me, I must have been staring at him.

“I ain’t never seen a person so polite to horses before. Most folks don’t even acknowledge they’re anythin’ more than a means to get from one place to another.”

He laughed. “Well, I figure I’m puttin’ my life in their hands gettin’ up into this wagon. And I want them to know I’m worth keepin’ alive.”

He climbed up into the wagon seat, his cheeks pink and smile so wide you’d have thought he had a million dollars in his pocket instead of a handful of lint. I swung myself up beside him and picked up the reins. Then I clucked to Dixie and Sprite and glanced to my side.

“You sure you want to come with me? I ain’t got time to bring you back if you change your mind.”

His smile slowly disappeared, and I felt kind of bad for that. Still, I needed to make sure this was what he wanted.

“Ain’t nothin’ here for me but starvation and abuse. I ain’t felt any hope in a long time, and I feel hope now. If you’ll have me, I’ll be joinin’ you, and I’m mighty grateful for the opportunity. I’ll help you out as much as I can, and I’ll try not to be a burden. All right?”

My chest tightened at the sincerity in his gaze. The fact he wasn’t making a joke or trying to push my buttons proved how honest his answer was.

Pre-order your copy of 760 Miles today and enter to win your own Advance Reader Copy e-book below:

a Rafflecopter giveaway
Don't forget to join us in the MM Romance Reviewed Facebook Group at 1pm today for AE Lister's Author Takeover and more chances to win! Just click on the graphic below - even if you can't be there live, stop by later to enter to win! 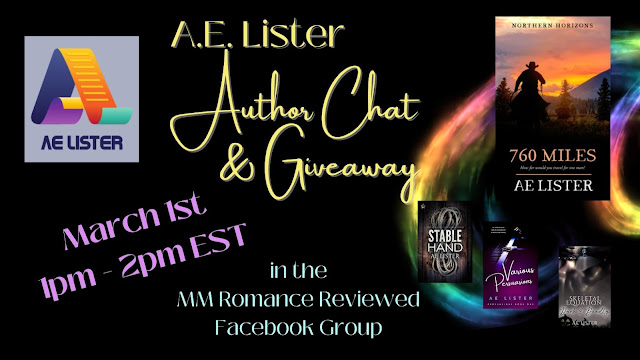