Marked By the Gods - Diana Waters 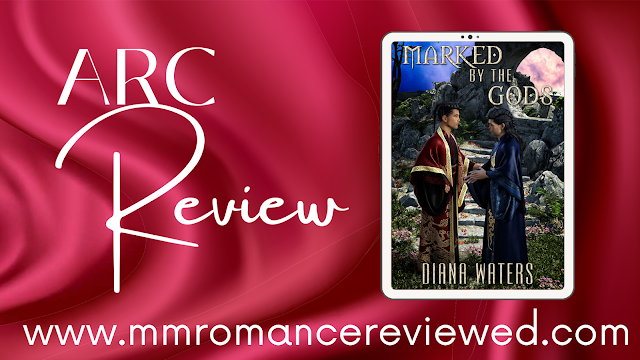 Marked By the Gods is a fantasy with historical and Asian elements - this is a short sweet story. Can the help and care of one man, save another while repairing their relationship? 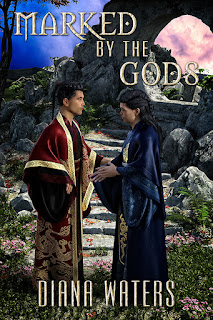 After an encounter that left both of them bitter, can spiritual advisor Sai-Jun and son of the general Shen-Fei overcome their differences in time to survive the buried secrets that threaten them?
As the youngest spiritual advisor of Foshana in over a century, Sai-Jun performs his duties with a single-mindedness that comes from years of study and training... or at least, he’d like to, except that a fateful encounter with a certain young man nearly a year ago continues to invade his thoughts. Worse still, that young man is Shen-Fei, son of General Shen-Ya, whose dangerous temper has inspired Sai-Jun’s intense dislike.
For all his father’s ambitions, Shen-Fei has no wish to follow in his footsteps as a warrior. Instead, his passion is for drawing—something the general will not tolerate. He also hides a dark secret that he dares not share with anybody—not even the one person who might be able to help.
With emotions threatening to come to a head amid the ever-present game of politics, will secrets be exposed too late? And even once they’re revealed, will Sai-Jun and Shen-Fei be able to resolve past misunderstandings and rekindle their lost love?
SNik's Review:
Marked By the Gods is a standalone fantasy-like historical novella.    It's a quick build into an historical, Asian similar world, filled with honor, familial expectations, traditions, and royalty.
Sai-Jun is the young friend and spiritual advisor to his country’s ruler, and has harbored feelings for the head general's son Shen-Fei for years. Almost a year later after their one night of passion and miscommunication, Sai-Jun and Shen-Fei struggle to rebuild a friendship when Sai-Jun is prompted to follow his interpretation of a dream and push to find if the general is as cruel as he believes. An entertaining story with two likable characters and the admirable determination of Sai-Jun wanting to help Shen-Fei, and risk his position for a chance for them to be together is sweet and caring. Good writing, I could have definitely stayed in this world to learn more about these men.
Rating: 4 Stars
Want a little more?  Check out the excerpt that Diana Waters shared with us on Teaser Tuesday!
4 Stars Fantasy historical novella second chance SNik sweet