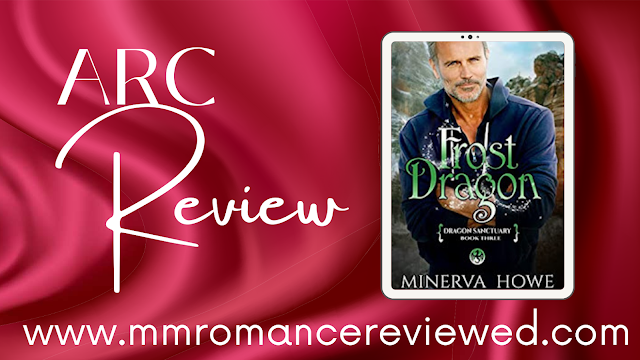 It's finally time! The long awaited arrival of Justin's twin has come and Brandon has snagged himself his own dragon mate.


From the Frost Dragon blurb: 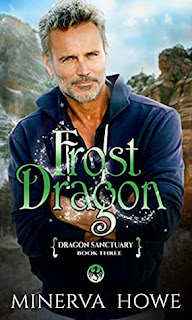 A Dragon Veil Universe Mpreg
Brandon is a scholar who is willing to go anywhere to follow the myths and legends he's been obsessed with since he was a child. Dragons. So when his quest for those legends take him from Colorado to deep within the heights of the Uintah range in Utah, where his twin Justin has been hiding out, he happily follows the trail.

Abraham is a contented dragon. As the family historian he has his books, and now he has new avenues of research to investigate too. When he needs social time, he cooks for his brother and his cousins. He doesn't really need a mate. So when Brandon comes along, Abe is certain Brandon his meant for his cousin Seth, and he rarely comes out of his study.

Frustrated by Abe's lack of response, Brandon sets out to prove to Abe that he's Abe's equal in the library, and in all the other ways. He knows what he wants, and he sees how wonderful it can be to be a dragon's mate thanks to his brother's happiness. Now all he has to do is convince Abe that he can step away from his books once in awhile and that they're meant to be together forever.

When we first learned Justin had a twin I thought he was going to be meant for Seth. However, I can honestly say that Brandon ended up being the perfect match for Abe. Who else could be meant for a man who spends all his time buried in books and would happily bury themselves alongside them? I think I was just hoping for Seth because of all the dragons in this series, Seth wants his mate the most. He's a romantic at heart and I am super excited that his book is next. But back to Brandon and Abe. These two had some trouble at the start of merging their lives together. Abe was used to being alone. He's older than Samuel and Owen, meaning he is more stuck in his ways. Sometimes he would find himself lost in his reading and not surface for days. This does not work when one has a mate. I felt bad for Brandon at some points. He was raised in the foster care system which I think has led him to have some insecurities. He often at first was always feeling like he was unwanted or in the way. That is not how a mated dragon should feel and thankfully Abe was able to rectify his early mistakes after some admonishing. With all the new babies and mates the dragons are going to seriously need to think about more space. Seth and Zeke are still waiting on mates as well which will lead to even more people. I'm really looking forward to the next two books. Seth and Zeke are tied as my two favorite dragons and you know what they say about saving the best for last!

Rating: 3.5
Frost Dragon is currently available in e-book and paperback and can be read as part of your Kindle Unlimited Subscription
3.5 stars ARC Dragons Fated Mates Jacqueleen KU MPreg