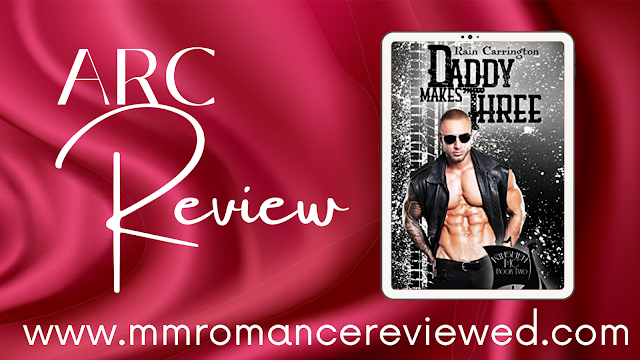 Erik is moving on from his old live and finally embracing the fact that he is gay. Silas and Xavien are a couple but they are looking for a third to join them as they are both submissive. Is Erik the man they have been waiting for?
From the Daddy Makes Three blurb: 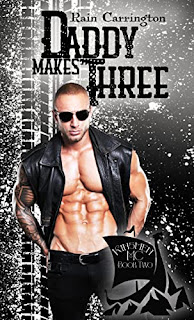 Erik Graves came out later in life. He went so far as to get married to a woman to hide from his own sexuality, but once the floodgates opened, everything rushed out, including his need to dominate men.
Moving to a new state to join another chapter of the Kinsmen MC, Erik meets Silas Osmund and feels an attraction, and more so when he meets Silas’s boyfriend, Xavien. They’re off limits, however, because he’s the son of his oldest friend. So Erik is left to pine for the two younger men in secret.
Silas and Xavien are into the BDSM lifestyle, and are completely devoted to it and each other. Their biggest dream is to find their perfect dominant, but after three years of searching, it feels like it may never happen.
Then they both meet Erik, and sense he is the one they’ve been waiting for. Pushing him to see past the fact that one of them is his friend’s son isn’t easy, but they have been patient so far, so waiting a little longer won’t hurt.
Or will it?
Can Erik see past who Silas is so he can be with the two most beautiful men he’s ever met? Will his duties for his club get in the way? Or, will tragedy break them apart before their lives together can begin?
PLEASE NOTE: This book contains elements of BDSM, homophobia, rough sex, and hurt/comfort. If these are triggers for you, please consider another title!

Daddy Makes Three is a really tricky book for me to review. I liked it and I read the full book but I wouldn’t say I loved it. There was something that just didn’t quite click with me but I can’t put my finger on what it was. I loved the concept of the story and I loved how the two boys were so accepting of who they were and how they wanted to live their lives.

For me the MC element of this book was fairly light but was still key in the story. I had some issues with the wording used by the characters but I think a lot of that is personal choice. On the whole this was a good book I think and definitely is heavy on the kink.

I have mixed feelings about Daddy Makes Three.  I loved the relationship between Erik, Silas and Xavian and some of the drama that surrounded them, but it felt like I was reading disconnected stories sometimes... particularly since all the drama revolved around Silas and Erik, while Xavian was in the relationship but not connected to the other parts...

Daddy Makes Three kept me engaged and I wanted resolutions of all the threads and the kink was definitely on point.  I would have loved to have seen Xavian woven into more of the other storylines.  That said, if you enjoy a kinky Daddy MMM romance with two willing, but often bratty subs, a Motorcycle Club/Arson side plot and more than I recommend picking up this book.