Audio Review: How to Catch a Vet (Chester Falls #6) by Ana Ashley, narrated by Nick Hudson 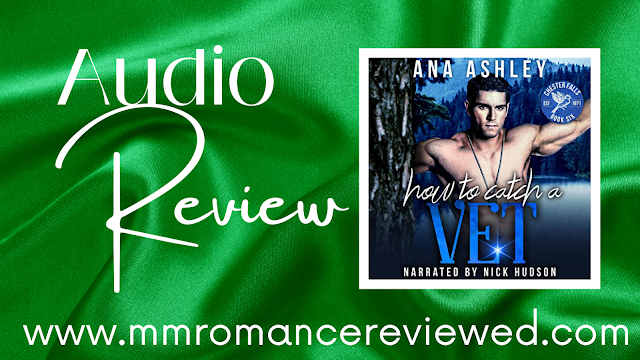 Jacquie says, "Second time around, this time on audio and How to Catch a Vet is still my favourite of the series." 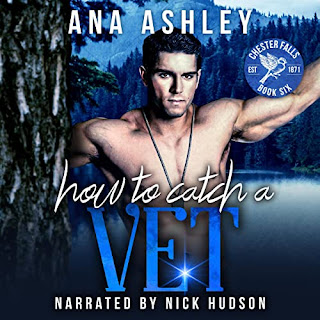 The first thing I learned at Vet school was to always expect the unexpected.
Well, I sure never saw Santiago Torres or his adorable Great Dane coming.

Santi is everything I’m not. Tall, confident, overbearing, and if I’m to believe his advances, he’s also very experienced in...well, you know what.

I always play safe, but it’s time to ditch the v-card. We couldn’t be more different, but that doesn’t matter because this is just a one time thing.

How to Catch a Vet is the sixth book in the Chester Falls series and features an opposites attract story between a virgin and a player, a Great Dane with a tendency to rescue- read kidnap- other people’s pets, and a small town like no other

How to Catch a Vet, book number 6 of the series is the sweetest to me and is full of difficult issues, such as Santi's sight and Micha's weight but it handles them well and in a way that doesn't become too angsty. There isn't a lot of drama, just the odd blip that every couple goes through. There's just an honest connection that is forged as they start their friendship that naturally evolves into something more.
Also, the animals in this were the cutest! Santi's dog loves to adopt others and it led to a lot of laughs. Characters from the other books in the series appear so it would be useful to have read/listened to them first.
I really enjoyed the narration for this, the listener is in safe hands with Nick Hudson. I particularly liked the author's note at the end and the little bit of personality we get to hear from Hudson, it made me laugh. I've not listened to all of the Chester Falls books but I think that's something I need to change.

Rating: 5 Stars
How to Catch a Vet  is currently available in Audiobok, e-book and paperback and can be read as part of your Kindle Unlimited Subscription