One Good Deed Deserves a Lover by Merry Farmer 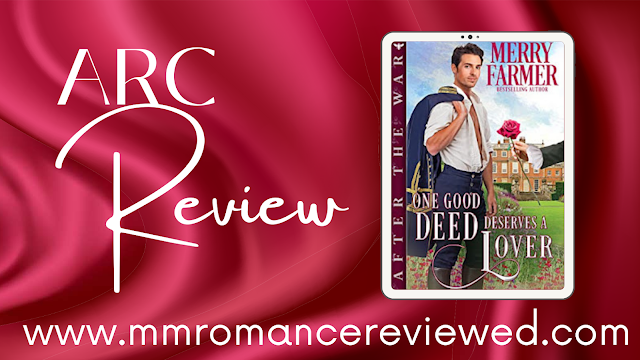 “I am not some innocent maiden with no knowledge of the world. I am a man who has struggled and fought to be himself and to cling to what is mine.”  One Good Deed Deserves a Lover 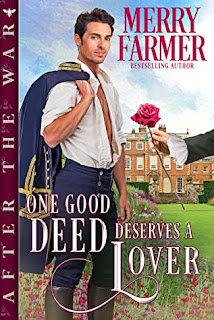 Lord Percy Montague is the house guest who just won’t leave. He is vain, entertaining, shallow, lascivious, and a lot of fun to have around. Which is why Lord Anthony Wodehouse is willing to let the man continue to stay. But the good liquor has been locked up, and the footmen have been warned.
Lieutenant Clarence Bond is the last man one would expect to find at a gentleman’s house party. He is gruff, boorish, outspoken, clever, and everything Percy is not. As the son of a wealthy industrialist who purchased his commission, it’s up to Clarence to improve his family’s standing in the world. But so far, he isn’t impressed with the nobility.

When Percy accidentally finds a lost child and ends up lauded as a hero—when his true purpose for being in the forest that morning was not so heroic—everyone in Yorkshire wants to celebrate him. Clarence isn’t fooled for a moment, but he is so amused by Percy’s attempt to play the hero that he goes along with the ruse…up to and including offering himself as a lover to give Percy the reward he truly deserves.

But what starts as a laugh turns into a chance for growth, true heroism, and deep love as both men discover they aren’t quite the rakes they thought they were.

PLEASE BE ADVISED: Steam Level - Smokin' hot! This includes explicit scenes between male lovers, so if that isn't what you want to read, please feel free to pass on this book.

One Good Deed Deserves a Lover is my favorite book of the After the War series. Clarence was formerly in the Royal Navy and is one of the duke’s guests at his house party. He is more of the strong, silent type. Percy is a local baron who invited himself to the party, though no one knows the true reason why until we get further into the book.
One of the reasons Merry Farmer is one of my must-read authors is the care she takes with her character development and world building. Percy seems like he’s a vain peacock from the outside looking in, but Clarence takes the time to uncover the man behind the mask. He finds that Percy is much more than the preening peacock he calls him. He’s like many of us who try to put on a brave face for the world when there are underlying struggles we are dealing with in our lives.
One Good Deed Deserves a Lover put me through the emotional wringer in some sections. Sometimes I was laughing out loud which was followed by frustration at Percy’s level of pride. Just as I was getting over my frustration with his pride I’d find myself needing a fan due to the spicy scenes. Toward the end of the book I was so nervous that Percy would find himself in jail (gaol) I found myself holding my breath. I was similarly concerned about the safety of all of the duke’s house party guests in the ending action scene. I should have known Merry wouldn’t let me down when it came to giving them their HEA!
This book has the perfect blend of action, mystery, and steam for me. I would classify it as spicy bordering on erotic. It does explore a Dominant/submissive aspect of their relationship.