A Matter of Fact by Kate Hawthorne. 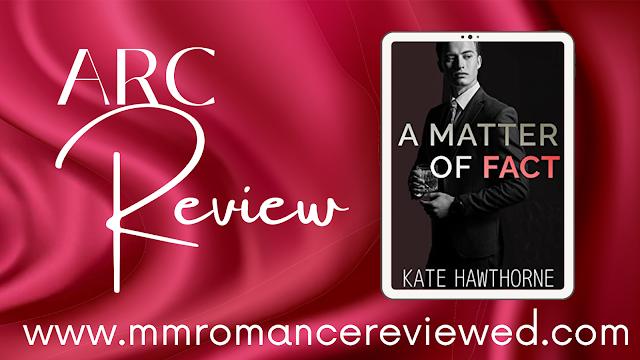 "He's just a man. Flawed and Perfect in different ways at the same time"

Kate Hawthorne brings the Two Truths and A Lie series to a close with a stunning transformation and a careful weaving and unweaving of the threads of the series and cultivating a beautiful romance ...
From the A Matter of Fact blurb: 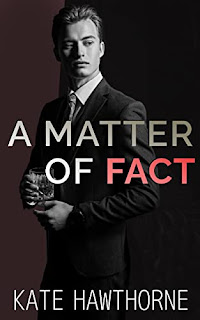 Name – Rhys St. George
Age – 37
Relationship status – Single
Looking for – A way to make all of this right
Biggest regret – Callahan McMillian
Hobbies – Having money, making money, spending money, and wine.
Name – Beckett Thatcher
Age – 27
Relationship status – Super Single!
Looking for – The kind of man who knows what I'm worth
Biggest regret – Being hesitant to form meaningful relationships after moving
Hobbies – Cooking, baking, and being a good plant dad
Rhys doesn't know what he wants anymore, but he knows he wants to be in Myers Bluff and he wants to make things right with his brother, and maybe his ex-boyfriend too. The only problem is... he doesn't know how to do any of that.
Beckett has a bad job and big dreams, and he's not going to let either of those things hold him back. He definitely doesn't have time to deal with a man like Rhys St. George, but there's something magnetic about the way too-rich-for-his-own-good man that Beckett can't deny.
Rhys is used to buying whatever he wants, but finds Beckett cannot be bought. For the first time in his life, Rhys isn't two steps ahead; he's half a pace behind. But maybe that's exactly where he needs to be to find what he's always been looking for--a purpose, personal redemption, and love.
Heather's Review:
I really can't begin my review of A Matter of Fact without telling you that while this book could easily stand on it's own as an amazing story of love and redemption, you really need to read the whole Two Truths and A Lie series to understand just how far Rhys St. George has come to even have the possibility of being a leading man in this story...
From the beginning of A Really Good Lie, Rhys has been the villain of the series - the man who ruthlessly broke Callahan's heart, who tricked and manipulated his brother, Sebastian in A Cold Hard Truth, so giving him the chance to be a romantic hero in A Matter Of Fact is a tough thing to ask Kate Hawthorne to do to herself... and we all know that she loves to bring the tough love...
Rhys' story is not only a love story, but a story of transformation, which is why the continuity between books is so important - to get Rhys to the point where he even wants to reach out to someone in a more than arms length relationship is something that you have to experience.
Have I convinced you to read the trilogy yet?  Or to go back and re-read the first tow books to pay attention to who Rhys is at the beginning and what he becomes by the end of book 2?  No matter - I'm moving on to the masterpiece that is A Matter of Fact... because we haven't even talked about Beckett yet...
Beckett is by far one of my favourite characters in A Matter of Fact and to be honest, the whole series, second only to Rhys... I love that he knows who he is, where he is and what he wants from a relationship and from life and he isn't afraid to stand up to Rhys to get it.... which brings us back to Rhys... a man who has spent years manipulating, conniving and making money, all while living under his father's threats and shadows and who is finally reaching for what he wants and what he wants is Beckett...
A Matter of Fact is more than a love story, it's a culmination of Rhys' 37 years on the planet and a turning point in the trajectory of that life... it's the end and a beginning and it's a beautiful story to read again and again..
I have loved every story of Kate Hawthorne's I've ever read, but Rhys is by far my favourite redemption character and I love, love, love the way Kate gave him his HEA.
If you can't guess by the review, I rate this book 5 Stars
A Matter of Fact
5 Stars Age Gap Billionaire Contemporary redemption Series steamy