Shades of Lust by EM LIndsey 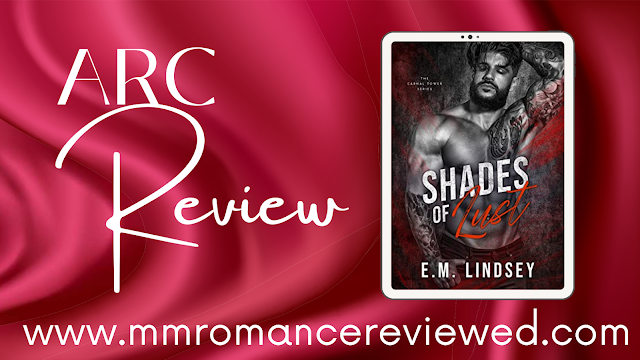 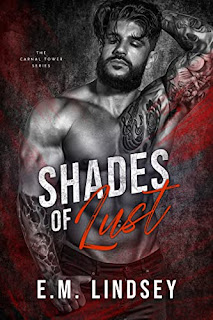 Shades of Lust was an unexpected surprise... in so many ways...

“The path to paradise begins in hell.”
― Dante Alighieri
On a small path leading to nowhere sits a looming cathedral, once-abandoned, now hosting the most dangerous of pleasures.
And Stone Brice is the most dangerous of all: Lust. A former acrobat, Stone’s life was changed dramatically after an accident, and now he runs The Carnal Tower, a place where people can go to have their deepest and sometimes darkest fantasies realized.
Stone is a man who is rarely taken by surprise, so when he meets the artist, August Ashley, he doesn’t expect to trip and fall at his feet—literally. But there’s something about the quiet stranger in the park that Stone wants to take apart, and that feeling only gets worse the more Stone gets to know him.
Stone is well aware he can’t mix business and pleasure, but when August comes to him with a proposal for a trade—seven paintings for seven nights with Lust—he can’t say no. Not when it means he’ll be able to have August exactly the way he wants him—even if it’s just for a week.
Stone has every plan to strip August down to his very soul, but the longer the week goes on, the more Stone comes to realize that August might very well be his undoing.
Shades of Lust is the first book in a new series. It features a bi-awakening, high heat, low angst, and the human embodiment of a seven deadly sin whose sole purpose is to make sure his client never forgets their week at The Carnal Tower. Each book in the series can stand on their own, and all contain no cheating, and a happily ever after.

If you go into Shades of Lust with preconceived notions, you might be disappointed about where this goes, but if you go in with an open mind, the journey that E.M. Lindsey takes both the characters and the reader on is exceptional.

Seamlessly blending the past with the present, Lindsey weaves a story which reaches into your notions of what lust even is... and what to expect from the other six deadly sins in future books.  Shades of lust is a deliciously slow burn to get to the promised high heat and worth every moment of anticipation.

I honestly don't want to say more because I might include spoilers - so just go read this book!

If you missed yesterday's Release Blitz posting, check it out here for an excerpt and giveaway!