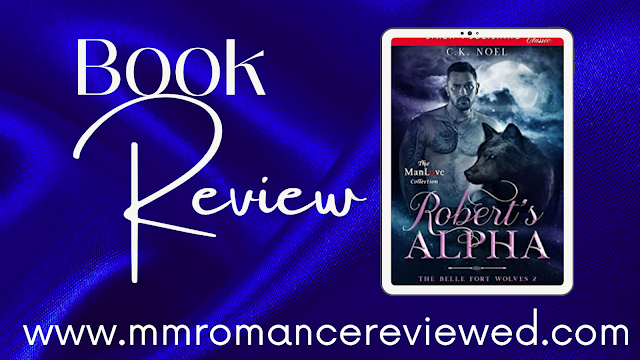 Robert's Alpha is the second book in the Belle Forte Wolves series and it follows on shortly after the events of the first book but with the focus on a new couple. 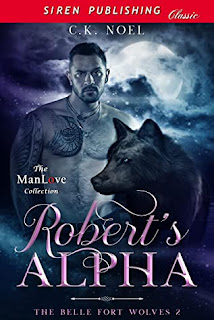 A tragic car accident stole Blake Caldwell’s beloved wife from him and his son. Six years pass. Blake, appointed alpha of a small pack, moves to Montana. He isn’t looking for love, and he certainly doesn’t expect his wolf to go berserk when he comes face to face with Robert.

Robert Sanna has made mistake after mistake, like sleeping with the wife of the man he’s been in love with since he was ten. Robert has learned his lesson messing with fated mates. He’s also learned he’ll never carry on the family name like his parents expect.

They might be fated mates, but Blake’s close-minded pack council resists the mated male pair. Complications arise from a she-wolf who’s set her sights on being the Alpha mate—and on Blake. And Robert’s fears might ruin everything. Can love win? Or will life tear them apart?

Blake is the newly appointed Alpha of the Tyler pack and when helping Tommy and Zach - the couple from book one in the series - he found his fated mate in Robert. During the first book I really did not like Robert and I had my concerns about the second book because of that. The fact that we got to find out more about Robert and his past and background led to me softening towards him and I found I was actually rooting for him and Blake to get their happy ending. I like how there is an underlying storyline as well as the ones for the individual couples and I am intrigued to discover the answer as to what is going on. I also like how well the characters are written and I am looking forward to the next book in this series.