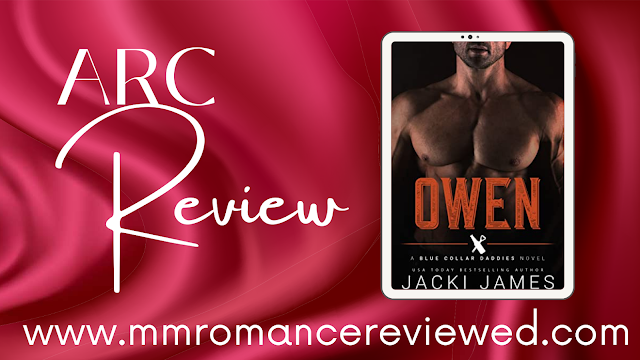 Owen is the fourth Blue Collar Daddies book from Jacki James and the one I've been waiting for - Owen's chance at a HEA... 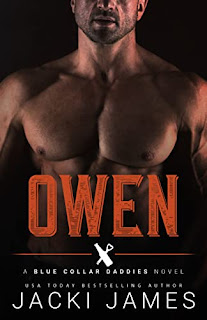 Fake dates only turn into real love in the movies, right?
Owen Flynn never expected to get an invite to his former boy’s wedding, and he sure didn’t have any intention of showing up alone. Enter Keegan Richards.
Keegan had always found Owen attractive, but he had never seriously considered dating a man. But when he overhears Owen saying he needs a date for his ex’s wedding, he thinks that sounds like the perfect opportunity to get to know the handsome older man, and maybe to explore a few of the things he’s been wondering about.
Owen had sworn off men, younger ones especially, but something about Keegan Richards makes him want things he thought he had long put aside. Is Owen right and he missed his one chance at love, or had the right man just not come along…until Keegan?
Red's Book Reads Review:
Owen is the fourth book in the Blue Collar Daddies series and while you could arguably read this as a standalone, it does help if you have read the previous books as you get a better understanding of the characters that way
Owen is the owner of Big O's the local pub where everyone gathers on a Thursday evening. Keegan is unhappy with his life and his job and makes a spur of the moment decision to help Owen out which may change his life.
I enjoyed this book and it was great to see Owen finally get his happy ending and to find himself a boy to love. Keegan was really sweet and I liked how he started to stand up for himself more as the story progressed and he was able to make the changes he needed. The two of them were really sweet together and I found myself getting really engrossed in the story and invested in their HEA.
Heather's Review:
Offering to be someone's fake date to a wedding is the perfect way to culminate months of flirting right?  I love how Jacki James sets up Keegan and Owen - sneaking looks and trying not to imagine being together, until they actually are...
I also love that this book doesn't start with a traditional Daddy/boy relationship... allowing both Owen and Keegan to be themselves in the relationship and create their dynamic!
As with the other books in the series, you see glimpses of how the first three relationships are doing as side characters in Owen and Keegan's book - which is fun and keeps the continuity of the series.
I really enjoyed sinking back into the Blue Collar Daddies world and read Owen cover to cover in one sitting, devouring this sweet, steamy and fairly low angst story that left me smiling and satisfied enough to wait patiently for the next story in the series...
Rating: 5 Stars
Owen  is currently available as an e-book and can be read as part of your Kindle Unlimited Subscription
4.5 stars 5 Stars ARC Coming Out Daddy Heather KU low angst Reds Book Reads Series steamy