oceans that swim by Casey Cox 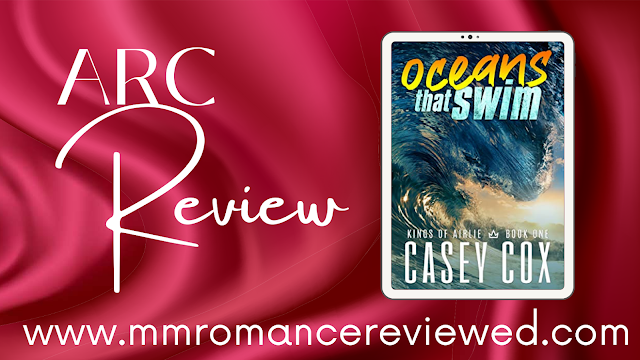 From the oceans that swim blurb: 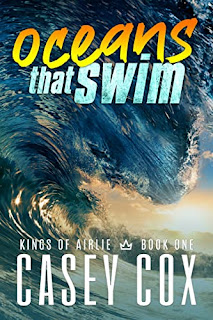 This season, I've got a lot to prove...
Terry King may have been born into kitesurfing royalty, but he's been overlooked and overshadowed his entire life. Unlike his fame-starved father, Trenton 'King of the Air' King, or his two attention-grabbing older brothers, Terry doesn't compete for fame, money, or power. He's got much more ambitious goals than that.
Terry has his sights set on reuniting his dysfunctional family and finally landing his forever crush: Richie Brown. A six-foot-four, anxiety-riddled, ginger teddy bear who writes heart-melting poetry. Also, the one and only person who's ever truly seen Terry.
Richie grew up next door to the King brothers in the sleepy coastal town of Airlie Beach, Australia. His childhood was marred by a tragedy that continues to invade every corner of his life twenty years later. Richie gave up on love a long time ago...until something unexpected happened the night of Terry's victory last season.
Richie knows better than anyone why Terry King is strictly off-limits. They grew up together. They're practically family. Richie's seven years older. Terry is his best mate's younger brother... But then there's the biggest reason of all. A closely guarded secret Richie's never revealed to a single soul.
Terry is determined to defend his world title and turn his dreams into reality. But when life throws a spanner into his season, and with the King family remaining as stubbornly dysfunctional as ever––will Terry be able to get Richie to see him as more than just the kid he grew up with?
Kings of Airlie is an exhilarating, action-packed MM sports romance trilogy about love, brotherhood, and resilience––with a powerful message that dreams don't die, they just sometimes change.
Each book in the series features a new couple and a happily ever after. With continuing family and competition plots, the books do need to be read in order.

oceans that swim is the first book in a new series by the author Casey Cox, whom I love to read. It's well written with a great storyline and wonderful characters. This is a slow-burn love story that goes throughout the book instead of just an insta love at the very beginning. While this has a HEA for the couple the book is written in a way to read the rest of the series. I can't wait to see where the author takes it from here.

Terry king was born into kitesurfing royalty but he has a lot to prove, overlooked by most including his father Trenton 'King of the Air' King but there's alway been one person in his corner, Richie Brown asix-foot-four, anxiety riddled, ginger teddy bear.
A complex story that is delivered to us in past/present narrative taking place in the the competitive world of kitesurfing.
It follows the Terry the youngest of the King brothers and boy next door Richie, Richie has always been in the King families lives. He's best friend to Terry's older brother Trav, so we have a brothers best friend and friends to lovers trope.
oceans that swim is full on. There so much going on from bullying-homophobia, mental illness, learning disabilities and paternity doubts. There's a 20+ year old murder case covered by true crime bloggers and a reality TV show that focuses on the dysfunctional brothers lives. There was almost too much going on and at times it really took away from a blossoming love story that I found myself much more interested in.
Terry was the absolute most caring loving guy! His relationship with Richie was adorable and I really believed in their love for each other. They had so much unwavering faith in each other.
oceans that swim has quite a few cliffhangers in this story and definitely can't be read as a Standalone, each book in the series follows a new couple, continuing family and competition plots. This is book one in the King's of Airlie series. I can't wait for book two to come out, I need all the answer to that ending!!!!
Rating: 3.5 Stars
Heather's unrated review:
I am not rating oceans that swim at this time, because, while I finished it and loved the ending, I struggled with the way that the timeline was written. This book uses a present/past writing style and the book jumps from event to event, which is difficult for me to process and enjoy... I almost DNF'd three times, to the point where I didn't think I'd review at all... but the characters called me back and I'm glad I finished it, but I truly struggled with getting through the book.
If you are like me and have difficulty staying in a book that shifts timelines between various points, you may find similar issues.   I truly love Terry and Richie and wish that their story could have been told with a different device, perhaps memories or even Ritchie's poetry as a way to bring up the past.
3.5 stars 4 Stars Ace Character Amy_TBS Heather KjnRose Series sports Trigger Warning