In Retribution by Courtney W. Dixon 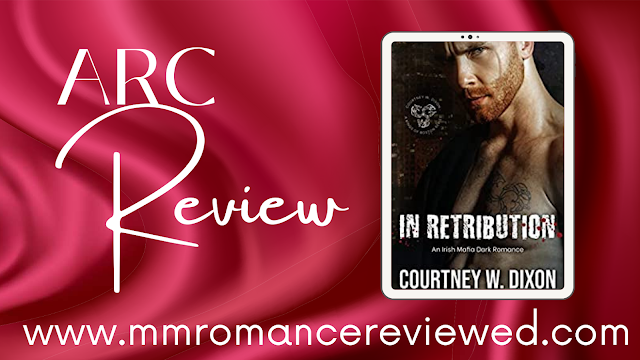 In Retribution is a MM Mafia Romance. Brady and Charles have both suffered a terrible past. From the first night they meet sparks fly but can they escape their trauma and have a life together. 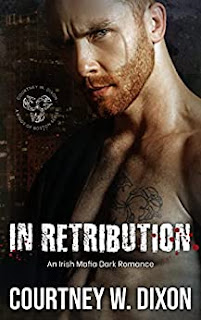 One night of lust could turn into an eternity of love. But desperation for vengeance could destroy their chance at happiness.
After a life of poverty and abandonment, Charles Nolan sought normalcy and stability. He controlled every aspect of his life with fine-tuned precision. Everything was orderly. Everything had its place. Then entered a man, during a one-night stand, who shattered his carefully constructed walls and heart with little effort. But there was a darkness surrounding him, bringing out Charlie’s own pain. Could Charlie get over his past? Could he allow this man to get close without crushing his soul? Or will his fears of abandonment take hold?
Brady O’Callaghan survived his father’s abuse, the man who ruled the Irish mob with an iron fist. But that didn’t compare to the loss of his lover. Suffering from grief and PTSD, he lived as an empty shell, alone, until Charlie danced his way into his life. Finally, Brady saw the light at the end of the tunnel. A glimmer of hope. Could he push past his grief and find love again? Would his enemies take away someone he cared about once more? Would he finally get his retribution?
A dark Irish mafia m/m erotic romance with HEA. No cliffhangers.
CW: PTSD, grief, homophobia, mention of child molestation, explicit language, violence, sex.
Each story in this series can be read as a standalone, but it will be better understood and appreciated reading in order.

Where do I start with this one? I will start by saying I feel awfully conflicted about In Retribution.

Did I enjoy reading this? Yes!

Unfortunately though there was several things things that didn't work for me as a reader, the constant use of the Nickname (Red God) just made it a tedious read for me, one or twice sure! But it was in every other sentence Charlie had.

Secondly, I felt there wasn't a lot of Character development. I wish the Author had  given us a bit more of a connection to the characters, yes we hear about Charlie's background but I really think a little past/present time hop would have worked wonderfully.

Although there were very dark subject matters in In Retribution  I feel like it was a very fluffy read, I wish there would have been more action/ dark feel to the book but that is just personal preference, i like dark Mafia Romances. This would be perfect for somebody who wants mafia romance that's quirky and light read but still has some darkness to it. This book deals with triggering subject matters/most appear off page, the two main characters discuss their past trauma.

Overall I did enjoy this read and like I said I think it's more personal preference that it didn't quite work for me. I would still recommend it. I absolutely loved Charlie and Brady as a couple. I think a bit more story pacing and character development was needed that's all.