For Keeps by R.A. Frick 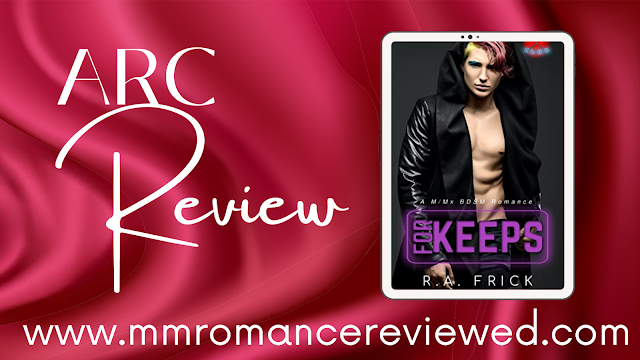 R.A. Frick's second X Club book is just as delicious as their first! I love seeing trans and non-binary representation in kink and R.A. Frick does it so well...
From the blurb: 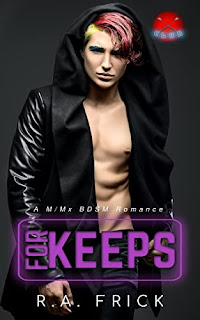 As a non-binary Dom and chef who just turned forty, my past affects every part of my life and makes it harder for me to trust enough to build relationships. Pining after my younger roommates in San Francisco, my friends point out my Daddy side, and I start to wonder what else could be possible.
My youngest roommate was a shy, sweet, red-headed trans boy finishing his fashion degree online. July’s confidence came out when he worked as a cam-boy every night, but he seemed to be holding back from pursuing the kinks he really wanted. His family was either dead or rejected him, and I have helped him as much as I can.
My other roommate, Roman, was living his best life as a fabulous, tech-savvy gay man by day, high femme Drag Queen by night. He had everything he wanted, but seems to need a firm hand as he flirts relentlessly, resulting in both July and I wanting him.
When one of July's online clients tracks him down and turns into a stalker who thinks Roman is a threat, Shepherd has to protect both boys. They were members of the same kink club as well as roommates and friends for years, but the forced proximity of hiding out reveals secrets long held.
CW: Stalking, guns, police, mis-gendering/gender dysphoria, mentions of abusive childhood/cult upbringing, disapproving family, and consensual kink.
Heather's Review:
R.A. Frick takes three amazing and dynamic characters and brings them together in the most delicious way!  After years of being roommates, the time is right and the spark is there to become even more... and each character brings a unique and almost perfect piece to the puzzle...
This book not only explores kink - specifically Daddy, boy and puppy play, it also shines a light on gender non-conformity and celebrates non-binary and trans identities, as well as demi-sexuality and drag.  I also love how the trio support each other through crisis.
And at the end of the day, it's a hot, erotic romance with a great storyline... yum!
Rating: 5 Stars
Tatted_book_freak's Review:
Another educational opportunity with a twist. From the mistreatment endured by law enforcement, intolerance of the LGBTQ+ community, and learning about this community as a whole was fascinating.

Shepherd, Roman, and the lovable July were forced into hiding at the hands of a aggressive stalker. Their relationship blossomed from here, increasing their connection drastically with a lot of free time to explore one another. Each taking on a pertinent role in their trio, which worked naturally for everyone.