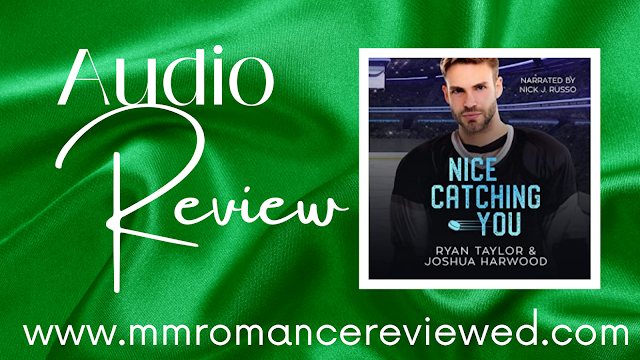 
From the Nice Catching You blurb: 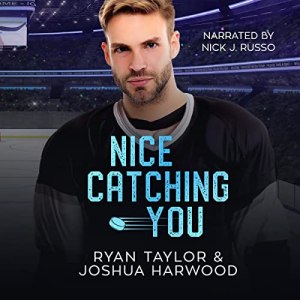 What happens when the No. 1 college hockey star in the country falls in love—with a man?

Nick Johnson, a top prospect for a pro hockey team, has a secret: he’s gay. Tired of living in the closet for the sport he loves, he sees no way out.

Jacob Meyer’s string of bad boyfriends left him cynical about love. Instead, he focuses on his studies as a third-year law student. With a new job waiting for him, he’s eager to graduate and move on.

On a school-sponsored trip, Nick and Jacob meet in a most unexpected way. When Nick tells Jacob his secret, they decide to hang out, just as friends. But their attraction is too strong to ignore, and they soon begin dating.

Since Nick is a big man on campus, it doesn’t take long for people to notice his attachment to Jacob. All hell breaks loose when the relationship gets out. As the national media descends, university officials try to figure out how to solve their “problem.” Their efforts divide Nick’s team, inflame fans, and put Nick and Jacob’s futures in jeopardy. Will the men be able to survive a plot to destroy them without derailing both their careers?

Nice Catching You is an out-for-you romance featuring a lot of love, exciting hockey, and a beautiful holiday. There’s also plenty of steam and a very happy ending.

When I learned that this mm romance by one of my favorite authors duo's would be released as an audiobook I could not wait to find out who would narrate it to bring it to an even higher level. I was pleasantly surprised when Nick J. Russo was the one. I can tell you he did an amazing job and the 8 hours+ went by before I knew it. Jacob & Nick have a whirlwind friendship which results in a relationship. Jacob, a law student,, is out, but Nick needs to find the courage to be true to himself. As a successful hockey player on a university team, he has to trust his teammates. Discover how this story unfolds to a HEA. This is another sweet story with a bit of angst by this writing couple. I recommend this book if you like a sweet story with a bit of angst about hockey, love, friendship, hot scenes, and guys with a heart of gold.

Rating: 5 Stars
Lesetiger's Review:
A captivating story and a great narration
I have already read some books by the authors Ryan Taylor and Joshua Harwood and was therefore very excited about Nice Catching You as an audio book, which I did not know as a book yet.
I love the authors' writing style because they write heartwarming, engaging, captivating and emotional.
Nick is the captain of the hockey team who has not come out yet. He's likeable and well-liked by his teammates. And he is the opposite of Jacob, a proud law student who is open about his sexuality.
The two first meet on a bus when it runs into trouble. Nick's protective instinct is immediately there and Jacob is intrigued by Nick as well. You could feel the sizzle between the two, who fall in love quickly, but the chemistry is palpable. I love it when a book is authentically told and I can connect with the characters.
Another plus was Jacob, who knows nothing about hockey. I found that very refreshing and it was fun to follow Jacob in the stands at his first hockey game.
Unfortunately, life isn't always easy and after Nick stands by his relationship with Jacob, the problems begin. Who will stand by him? Where do things go from here?
I enjoyed the story immensely. For one thing, there's the emotional and heartwarming relationship between the two, which is pretty hot at times. Also, ""Nice Catching You"" features great supporting characters - I love most of Nick's teammates and the way they relate to their captain.
It also deals with serious issues and difficult situations and this was told in an exciting way.
If you want to read a fascinating story about sports, friendship, team spirit, love and coming out, but also homophobia and people who love to make life difficult for others, you should definitely pick this one up.
Nick J. Russo is a talented storyteller who nailed the characters. I love how he brought the story to life. He is very good at portraying the emotions of the protagonists and it was a great pleasure to listen to his pleasant voice with all the different pitches, different voices and always a pleasant pace of narration. The almost 9 hours passed very quickly.
Highly recommended!
Rating: 5 Stars
Nice Catching You is currently available in e-book, audiobook and paperback and can be read as part of your Kindle Unlimited Subscription

Try Audible Premium Plus and Get Up to Two Free Audiobooks including Nice Catching You!

Don't forget to head over to the Release Blitz post with an Excerpt and Giveaway!