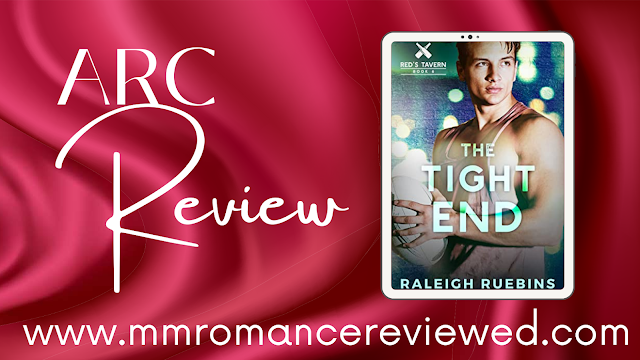 Another winner from the Red's Tavern series in The Tight End 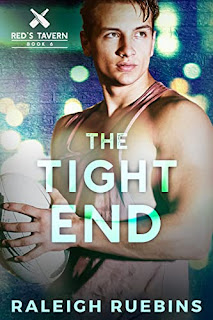 He’s an introverted nerd, and I’m the football player everybody wants.
But I only want to drag his shy, adorkable, irresistible self into my bed.
All I’ve ever been good at is running fast with a football clutched tight to my side. As a star football player for the KMU Wolves, I’ve had any guy I wanted for years, and I'm more muscle than smarts. My new roommate, Logan, is something else completely. He’s the bookworm I never was, and it seems like the closest thing he’s had to a love life is with his books.

I don’t do relationships, and I sure as hell don’t fall for anyone. But when I’m close to Logan, I’m pulled to him like a damn magnet.

He’s been hurt in the past, and I want to prove to him that there’s more to me than just physical strength. When he finds out I’m totally screwing up my senior year classes, Logan offers to help. It turns out there’s a whole lot I can teach him, too—and not just about football. I feel myself falling for every part of him: his brilliant mind, his big heart… and every inch of his body.

Being out and proud as a football player means I get more attention than I deserve, both good and bad. There’s no chance I’m letting Logan get dragged into the headlines and picked apart like I am.

But I'm used to scoring. Winning. Getting what I want.

And now all I want is him

This was a whole lot of sweetness. There's next to no angst and it was paced beautifully. Often I get distracted and go do something else but this kept my attention throughout. Though there isn't a lot of steam, there was enough and it fit the characters, anything more would have been overkill in my opinion.
I loved how Brody was insecure about his intellect and his memory. It made this gorgeous, athletic man more realistic and easy to sympathise with. Logan was a sweetheart, hiding away in his books after an awful high school experience and he felt very relatable. I adore the nerd/jock pairing especially like here, where each wasn't too much of either stereotype and they managed to find common ground. There are a couple of visits to Red's Tavern since Sam is Logan's cousin and it was great to see those characters again.
The Tight End can be read as a standalone but might be better appreciated as part of the series, or at least after reading The Stepbrother first.

Rating: 5 Stars
Heather's Review:
I honestly love that the Red's Tavern series has offered a huge array of characters, ages and tropes!  The Tight End is a New Adult/College story that is directly tied to The Stepbrother and is more loosely tied to the rest of the Red's Tavern stories.. but it's everything that I've come to expect from a Raleigh Ruebins story - sweetness, steam, humour, endearing characters and not too much angst!
While this book has a completely different esthetic than the other Red's Tavern stories, it still brings true Raleigh Ruebins flavour with amazing dialogue, excellent pacing and a story that kept me enthralled from start to finish.
5 Stars
The Tight End is currently available in Kindle e-book and can be read as part of your Kindle Unlimited Subscription
5 Stars ARC College Contemporary Jacquie Jock/Nerd New Adult Series sports Standalone