'Instead, I did the opposite and rested my head on his shoulder, closed my eyes and let him hold me. It felt good to be held.' -

From the Hidden Love blurb: 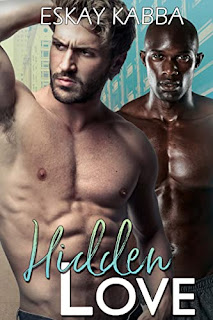 Connor is the perfect guy.
A blonde haired, blue eyed, handsome military veteran with a beautiful girlfriend that he has had since high school, and he comes from a good family of Irish Catholics. On the surface, he pretty much has it all.

But Connor is hiding secrets.

Connor is actually a gay man who goes from one tryst to another while his best friend Afia pretends to be his girlfriend. But as Afia falls in love with someone else and introduces Connor to his older brother Jamel, an African American man with a rock hard body and gentle soul, he slowly realizes what he has been missing in his life by hiding who he is from those around him: the love of a good man.

But is it enough for Connor to step out of the closet and be his true self?

Triggers apply: abuse by a parent mentally and physical.

Hidden Love was a beautiful wonderfully written book by a new to me author. Connor is seemingly going through life with no objective to commit to one man. His own upbringing might be a real reason for this. He cares deeply for his friends but struggles to be kind to himself. One day he meets Jamal and a time later they go on a date. Jamal is taking things slow in Connor's opinion. But they have to find their way into the relationship in a way that works for both. They find their hea/hfn in the end. The heat level for me was fairly high.
I recommend Hidden Love, but be aware you will feel a lot of emotions, at least I did.
Rating: 5 Stars
5 Stars ARC Contemporary ex-military Laora Trigger Warning