The Falcon and the Foe by A.T Truman

The Falcon and the Foe by A.T Truman is a fun series opener and I'm looking forward to where this series is headed... 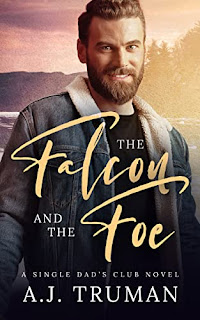 Two single dads. One huge grudge. And one tiny tent.
It’s hard enough balancing two jobs with raising my son solo. Forget dating. I barely have time for laundry.
But when my son’s scouting troop The Falcons needed a co-scout leader, I couldn’t say no. There’s just one ginormous problem: the other scout leader Russ.
To all other parents, he’s #DadGoals, Mr. Sexy Widower who lords over the drop off line.
To me? He’s the bane of my picket-fenced existence - stuck up, anal (not in the fun way), and definitely the person who got me booted from the Parent Teacher Association. I can’t let him wrest control of The Falcons and have history repeat itself - no matter how hot he looks in his khaki uniform.
Thing is, the more we work together, the more I glimpse the caring man lurking under the cold exterior. Maybe he isn’t the completely wretched human being I thought.
We’d both sworn off romance to focus on fatherhood, and nothing’s going to change that, not even sharing a too-small tent in the wilderness.
Jacquie's Review:

Within the first couple of chapters I'd swung from hating Russ to hating Cal. The way that each is described by the other really had my opinion shifting. Quickly it became apparent that each character had their issues but were actually quite sweet.

I loved their back and forth in the first half of the book and that translated to get chemistry when they finally starting hooking up.

The second half lagged a little for me in places. It was still enjoyable, just didn't quite hold my attention the same until later on.

The Falcon and the Foe is told in dual pov, a medium burn with a great enemies to lovers theme and a lovely HEA. I'm excited for the others in this series especially since they are all older (40+)