I have read the entire Maiden Voyage series and was so excited to get to ARC read Shadow's Light! 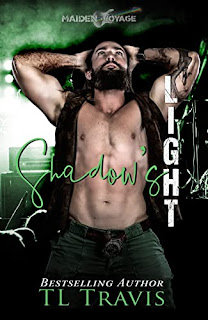 You never know what hides behind sad eyes.
For Javier Jimenez, aka Shadow, drummer for the award-winning metal band, Maiden Voyage, life off stage isn’t all glitters and rainbows. He plays the part of the Devil May Care drummer when he’s in the spotlight, but outside of it, the only person who knows the real Javier besides his family is his bodyguard, Tony.
Lucas Shane never expected to run into his ex, Joey Hayes, lead singer for Social Sinners. In fact, he did his best to ensure their paths never crossed yet here he stood, face to face with Joey and his husband, Stoli. Yes, Lucas made a huge mistake when it came to Joey, a regret he must live with. But no one really knew how or why it happened.
Shadow doesn’t question love, as he loves so few, but he does question loyalty. The two should go hand in hand but he learned the hard way early in life that they don’t always align. Finding out that those two key elements Lucas had failed at led him to walk away, though his heart felt otherwise.
Maiden Voyage series must be read in order as each book starts where the last one ended but from another band members point of view.
My Review:
First off, I need to reiterate from the blurb - Shadow's Light is not a standalone book if you want to get the full experience, you need to know where the characters com from - particularly since both Shadow and Lucas have a history with other bandmates and this story does start in the middle of some drama... but if it draws you in, I think you could pick up on a lot of the history and the drama because TL Travis has such a rich writing style...
I love Shadow!  He's been one of my favourite characters throughout the series and I'm loving him even more now that I understand more of his story... and I love Lucas for him...
Shadow's Light deals with a lot of angst, some pretty unsavoury characters and situations, but through it all it is a well thought out love story that tugs at your heart... and they fit together in ways that only TL Travis can imagine...
There are several triggers- rape, prison, dubious consent, forced prostitution.  It's not an easy read, but it is one of my favourite of the series so far and definitely ends with a HEA.
Rating 5 Stars
5 Stars angst Heather Hurt/Comfort Rockstar second chance Trigger Warning