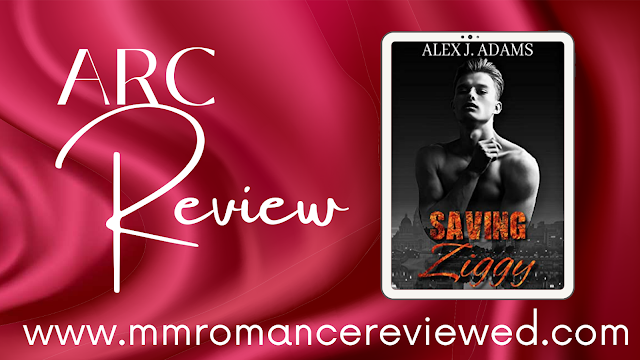 "So this was it. Not how I’d envisaged my life, dying at the tender age of twenty, never having lived my life to the full."

From the Saving Ziggy blurb: 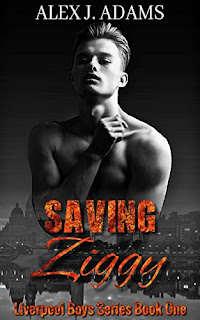 Leaving home four years ago was the best thing I could have done. Selling myself on the streets for the past two years, the worst, but what else was I to do? All I truly wanted was someone I could love and someone to love me in return. Was it really too much to ask?
Meeting him, the most handsome man ever, I thought all my prayers had been answered…..until they weren’t.
That man was almost the death of me.
I survived though, it’s what I’d always done and now I needed to try and rebuild my life.
Marc saved me, was with me every step of the way, showing me that finally, good things can happen. He thought I was damaged, and I probably was, too many emotional scars that would take time to heal.
But Marc had them as well and together, I knew we can find the love we both deserved.
Saving Ziggy is a darker MM romance about a male prostitute and the paramedic that saves him.
Please heed the trigger warnings: This book features abuse, both verbal and physical and sexual assault.

Saving Ziggy is this third book from this author and the first one in a new series 'Liverpool boys' . It is, hence the title, set in Liverpool. on the seedy side of town. I felt the grime, dirt and grit coming of the pages when reading the book. It is an unusual book in the sense that the main characters meet around 40/45% into the story.

I found the first part was more drawn out and the later part, although well written felt more rushed to me. This book has a hfn/hea.

Ziggy a 20  year old prostitute, who desperately wants a better way to live after two years on the street. After his best friend left his live turns seemingly for the  better, but he finds things seem not to be as portrayed.  After his most dark and  grimm evnthe dares to trust in  Marc, the man who saved him and takes care of him with the help of his family. This of course is not a straight-line and Ziggy has to work hard to tame his demons to be able to be with Marc.

*Triggers do apply: grooming, abuse both verbal and physical (on page)

*Saving Ziggy is not a book when you have a tough day or are down.

Saving Ziggy was a wild ride. It is the embodiment of the meme: It really had me going in the first half. Because in the first half, the book is told solely from Ziggy's POV. The man that he's with in the first half seems, at first, to be exactly the kind of man that Ziggy is looking for though there are some incredibly bright red flags.

And then everything shifts. His romantic hero's true colors show in a way that almost destroys him and we get to meet MC2, Marc. He meets Ziggy when Ziggy is at his lowest point and is instantly drawn to the broken man in the back of his ambulance. He checks in on him at A&E and witnesses a scene between Ziggy and Damian, the man from the first part of the book. Once Marc enters into Ziggy's life, the book takes on a different tone: one of healing.

This book left an impact. I loved the relationship between Marc and Ziggy. I loved the way that Marc's family became Ziggy's family over the course of the book. I loved that the relationship between Marc and Ziggy took time, that the attraction between them was not given into immediately and that Ziggy was given time and space to breathe and heal. I especially liked the way that Adams dealt with Ziggy's trauma, not making it gone immediately and still existing years later in the epilogue. The side characters were beautiful and dynamic, just as much as Ziggy and Marc themselves. I don't feel that there was any scrimping done on characterization nor plot.

Honestly, I can't think of much about this story that I didn't love.

Saving Ziggy is a powerful hurt/comfort story told in a Dual POV with a pretty high level of angst but enough sweetness and softness to balance it out. It is a darker romance, and if you're sensitive to topics such as sexual assault and grooming, it is not for you. Please heed the trigger warnings that Alex J Adams puts at the beginning of the book, because those things exist and they are a very large part of the story itself.