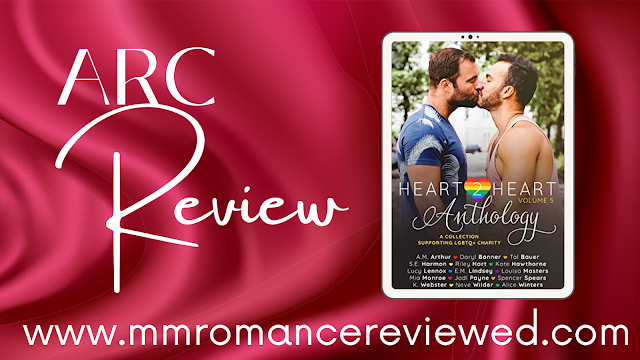 A must read anthology for a great cause 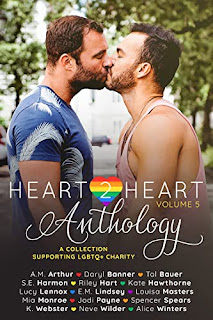 Once upon a time, a bunch of authors wondered... what would happen if Heart2Heart, the dating and community app responsible for bringing together couples from all over the world, encouraged people to do something they’d never done before?
#NeverHaveIEver is trending on H2H, and fourteen authors who’ve never before appeared in a Heart2Heart anthology (and one who’s never left) have come together to show how funny, hot, and heartwarming it can be when H2H app users challenge themselves to do something outside of their comfort zones--from singing in public, to skinny dipping, to getting their first real kiss--while they manage to fall in love along the way.

As always, all proceeds from this anthology will benefit LGBTQ+ charities to ensure that love in all its incarnations will be celebrated and protected every single day of the year!

I started out with one of my favourite authors, Alice Winters, and her story, Never Have I Ever....Ridden a bike. This was funny, really cute, full of hijinks and adventure. It's a best friends to lovers tale, told from the single pov of Owen, who has never ridden a bike and is in love with his best friend and roommate, Lance. They have a cat which is integral to the story. Loved it and want more, please!

Next was E.M Lindsey's ...Worn that for Halloween. Really cute friends to lovers, told in single pov by Dom, who is a baker and in love with Shiloh, his best friend. There's a mild kink element which I enjoyed and a meddling dad. Really sweet and I'd also like a longer version.

K.Webster's, ...Gotten Lost felt like a full-length story, maybe because it was dual pov, but I loved the grumpy/sunshine pairing, the idea of soul-mates and just the way that Hunter and Andrew just fit together. It was pretty emotional - I nearly cried. For me, it felt like history repeating itself in the best way with the parallel to Andrew's parents.

Lousia Masters ...Spent the Night with Blanche was adorable and steamy. Fin has never watched the Golden Girls and meets Clay at a viewing. Their meeting is a total meet cute and helped along by new friend to both, Ripper. I liked the almost found family aspect of the story. Told in dual pov and is pretty steamy with them starting as hookups.

Neve Wilder ...Flown in an Airplane. Flight attendant, Jack, meets never flown before musician, Beau on a flight to Venice. There was a feeling of serendipity because Jack had seen Beau play before and it was a lovely and also steamy story. I'd absolutely love more stories of them travelling the world together.

Last but not least was Spencer Spears ...Kissed Someone on the Lips. Super shy and anxious, West, meets thief, Tenn when he comes bursting through his window. West blackmails Tenn - a kiss for an alibi but in a cute, harmless way since it's obvious that Tenn has the upper hand. Features West's first time. This one felt like it has the potential for a series or at least a full-length novel.

In short, Heart2Heart is a great mix of stories and I would absolutely recommend picking this up, especially since the proceeds go to charity.

All the stars
Heather's Review:
I read Heart2Heart cover to cover front to back.. lapping up every story and saying to heck with anything else I was supposed to be doing... the stories that stick out for me were Louisa Masters... Never Have I Ever... Spent the Night with Blanche which was so cute and paid homage to The Golden Girls in a lovely and steamy way...
Similarly, S.E. Harmon's entry,  Never Have I Ever...Watched the Godfather mixed classic films and reunited a workaholic lawyer with his college crush...
Kate Hawthorne's entry Never Have I Ever... Taken a Vacation teases and titillates from the opening paragraph to the steam poly ending that leaves you wanting so much more... such a tease!
A.M. Arthur's entry Never Have I Ever... Cold-Called a Stranger's Phone Number takes us into Charlie's world as he struggles with his wants and needs but also the way others view him... the opening line is "Charlie, you are without a doubt the most boring person I know,"... and it spurs him on to take a risk and call a phone number stuffed inside the urban fantasy book he's chosen to read...
Mia Monroe's Never Have I Ever... Had a Makeover was an adorable meet cute between Constantine, a university professor and his Makeover specialist Deacon!  It's sweet, hot and steamy and in just a few chapters gives you the warm fuzzies and gives Con and Deacon their HEA.
Riley Hart's Never Have I Ever... Gone Skinny Dipping involves a shy writer who is crushing on the flirty Coffee Shop owner where he sits to write erotic gay romance even though he's barely experienced it himself... it's a slow burn build from flirting to friends to lovers all in just a few chapters... so amazing!
Another favourite was Daryl Banner's Never Have I Ever... Dyed My Hair Flaming Red - the story of Zakary, a theatre stage hand with amazing acting chops and Jonatho, a playwright and excellent judge of Zak's character and acting skill... and of course the attraction between them.
All of the stories in Heart2Heart were great reads and the fact that all of the proceeds go to support amazing charities makes this book worth your time and money!  Remember that this e-book (and the amazing paperback edition) is available for a limited time so grab your copy of Heart2Heart today!
null
5 Stars Anthology ARC charity funny great mix Heather Jacquie sweet