"This is it. He’ll never get it if I don’t say it. I cupped his face with my hands, forcing him to look into my eyes. “You may have broken my heart four years ago, but you’ve found all the pieces, put them back where they belong, and made my heart whole again. I loved you then and I love you now.” - Camden

From the Floored by Love blurb: 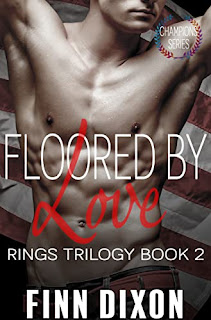 Lucas
I tell myself I can do it all over again. And do it better. Even without a boyfriend.
I mean...who better to succeed at the Olympics than me? Though training this close to Cam again and seeing how his body has developed might be too much for me.
Plus, being naked in the locker room with him makes it even harder...to focus.
It doesn’t take long for my pining curiosity to turn into desperate hope.
Is it possible that Cam still has feelings for me?
Camden
I relied on Erika to survive my heartbreak. I even made a new friend, the tall glass of water known as Colton. Any normal gay dude would have thrown themselves at him and said, ‘Pick a hole.’
Not me, of course. While I was tempted, at least one part of me didn’t give the green light. My heart.
What was left of it still belonged to Luke.
Without answers for what happened in Brisbane, he’s my teammate again. If only my hormones would mind their own business, then maybe I could focus on the Olympics and worry about Luke after I win.
Piece of ass...I mean, piece of cake.
I’m so fucked.
Floored by Love is a full-length gay romance novel, the second in the Rings Trilogy, with no major triggers, but possibly a little angst. Within these pages, you’ll find notepad flirting, almost-sex in a hospital, freeballing, a wet superhero with a bare ass, five Olympians in a hot tub and muscles flexing beneath designer jockstraps. Oh. It’s also the Olympics again. And though there’s a third book coming, there is no cliffhanger this time.

I was awaiting this second book in the Rings Trilogy series to learn how things would progress between Cam and Luke.

Floored by Love takes place at the next Olympics and they find their HFN after an incident with Cam that makes Luke realize Cam is more important than his family. With a spectacular semi spontaneous coming out by Cam. Wow

I enjoyed reading about previously introduced characters and learning about new ones.

I am looking forward to the last book in the series to see how and if Luke and Cam their relation develops further. I also hope the other guys in the team will get a bit more backstory and development in their relationships. Or the author might decide they get their own book(s).